Americans and the Other

Nothing binds Americans together more than the foreign “Other”, especially in the context of war.

On the morning of September 11, 2001, I was tiredly sitting on the “L”, on my way to work in downtown Chicago. I didn’t make it two steps into my building when we were sent home for fear an attack on Chicago was imminent. Over the next year, I was impressed, frustrated, and disgusted by the American reaction to the tragedy. Patriotism skyrocketed, flags were flying everywhere, and Americans were joining together in solidarity. Well, Americans that didn’t look like the people who attacked the country anyway. Those Americans were being ostracized and demonized.

David Foster Wallace, in his article “9/11: The View from the Midwest”, really captures the feel of those days. When explaining the unity of Americans at the time, Wallace points out the strange truth about flags: “If the purpose of a flag is to make a statement, it seems like at a certain point of density of flags you’re making more of a statement if you don’t have one out” (Wallace). The sense that not joining in the unified display of patriotism was an indication of hating America or sympathizing with terrorists was very real. When threatened by an outside force, America joins together in an almost obsessive way, and there is certainly a negative reaction against those who do not join in the spectacle of unity.

Whitman, in “Over the Carnage Rose Prophetic a Voice” and “First O Songs for a Prelude”, discusses American unity in a much more positive light. Wallace’s undertones suggest a possible falsity to the displays of unity; he points out that his fear over not having a plastic flag is rather macabre when so many just died - the unity of the living subjugating the loss of the dead. Whitman’s discussion, however, proposes this unity is a favorable attribute. 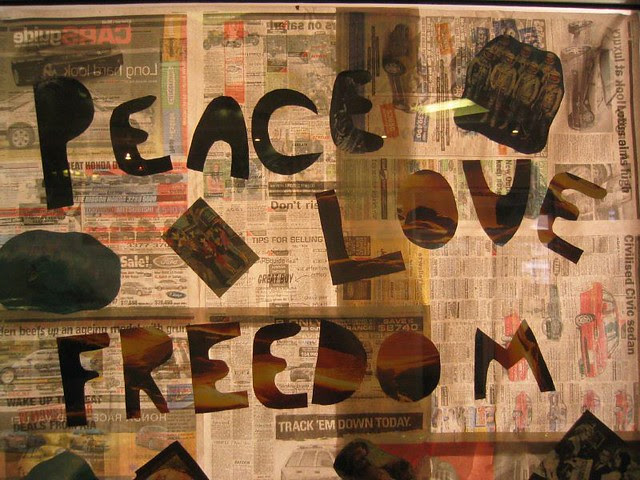 In “Over the Carnage Rose Prophetic a Voice,” Whitman argues that the only way for peace and freedom to flourish is through love. I think his poem would have been useful in the days after 9/11. Arguing that “the continuance of Equality shall be comrades”, Whitman’s words may have discouraged the rampant hatred that sprung up against the Middle East, against Muslims, against anyone who looked in any way like the terrorists.

Whitman again addresses this unity in his poem “First O Songs for a Prelude” which is about the way his community quickly “threw off the costumes of peace with indifferent hand” to join in the war. He speaks of all the men, listing various jobs they have, leaving to fight, arming themselves, “blood up”. The men join together in arms, the mothers sadly, worriedly support their sons' decision to join, all are working together towards the united front.

In “Over the Carnage Rose Prophetic a Voice”, Whitman says “affection shall solve the problems of freedom yet”, and I certainly hope this is true. This theme of Americans joining together in solidarity – whether to fight or to support the fighters - seems common in American war literature.

Obviously patriotism is still alive and well in America today, but do you think the extremes of it are actually polarizing the country?
Posted by Trisha at 3:30 AM