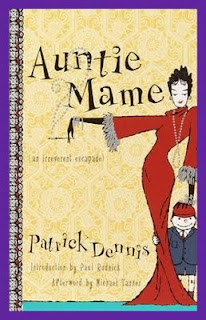 Patrick Dennis is sent to live with his eccentric Auntie Mame at the tender and impressionable age of ten. Mame promptly enrolls him in an all-naked all-the-time coed school...and he is promptly removed by his much more conservative trustee. From there Patrick's life is turned upside down and inside out by his aunt, who is determined he not turn into some briefcase wielding stuffed shirt.

Paul Rudnik, in his introduction to the book, says "Auntie Mame is America's diabolical answer to Mary Poppins." I couldn't agree more. Auntie Mame is every child's wet dream of a guardian. She is eccentric, liberal, fun-loving, often drunk, and always exciting. Alternately Patrick's best friend, a needy relative, and a caring mother, Auntie Mame is never dull.

According to Auntie Mame, nine a.m. is the middle of the night, adopting the accent and habits of any culture makes you of that culture, alcohol is an everyday, all hours necessity, and intellectualism is akin to godliness. According to a review at Powell's, "She was anti-establishment, anti-bourgeois, anti-racist, anti-bad taste, and anti-pretension. She was also pro-youth, pro-sex, pro-tolerance, pro-nudity, and pro-drugs (though her drug of choice was gin)." In other words, she was rather awesome. I fell in love with this woman quickly, and while I'm not sure I would want her as my guardian, I would love her as an aunt.

Along with the characters, I also enjoyed the organization of the book. Each chapter is a separate escapade featuring Auntie Mame and more often than not Patrick, the narrator of the story. The book is held together by simple but effective hook: Patrick is telling these stories about the past after reading about an Unforgettable Character in Reader's Digest. His purpose is to show how this Unforgettable Character is nothing when compared to his Auntie Mame. The beginning of every chapter summarizes another characteristic of this Unforgettable Character, and the rest of the chapter shows how Auntie Mame was both the embodiment and the antithesis of that exact characteristic.

The best part about reading this book, in my opinion, is that it was published in 1955. This isn't some modern look at the 20s and 30s. The liberal views on homosexuality, religion, education, family life, and relationships are from the perspective of a 1950s man - and they could fit right in with the most liberal of our contemporaries.

I highly recommend this book!

Has anyone else reviewed this?
Posted by Trisha at 8:13 PM