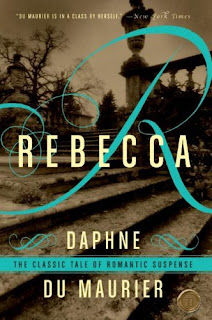 Shy, inexperienced, and new to the world of the rich and famous, a young bride struggles with her life, specifically the memory of Rebecca, her new husband's deceased wife.

Rebecca is a beautifully told story. Du Maurier's descriptions of the setting, the events, and the fantasies of our narrator are vivid and poignant. The fantasies leap off the page for me. The narrator constructs scenarios in her head continuously, revealing her deep-seated fears and her expectations. She invents future scenes where she is embarrassed, hurt, or ignored. It was an exceptional way to reveal the narrator's personality.

These glimpses into her psyche, however, made me alternate between wanting to scream at, comfort, teach, and scold the narrator. Her self-conscious, self-defeating actions and attitude were painful to watch (er...in my head anyway). As I read the scene where Mrs. Danvers is suggesting a gown for the fancy ball, I was yelling in my head: "Don't take her advice? She's playing with you." I knew it was going to end badly, and for the next pages, as our narrator builds herself up, finally finds some hint of self-confidence, my heart actually hurt at the thought of what was coming. When the inevitable happened and she descended those steps to finally reveal her costume, I was horrified with her, saddened with her, and embarrassed with her. This depth of empathy with the main character is, I think, a real indicator of the talent of du Maurier.

Memorable Scene: Towards the center of the novel, Mrs. de Winter finds herself alone in the late Rebecca's room with Mrs. Danvers. Over the next 7 pages, Mrs. Danvers leads Mrs. de Winter around the room creepily showing Rebecca's beautiful possessions, pointing out Rebecca's wondrous personality, exclaiming upon Rebecca's beauty. This scene where the old, skeletal, vicious maid is telling the new bride how wonderful the dead bride was disturbed me greatly. I could feel the depth of Mrs. Danvers's obsession for her dead mistress, the acute pain of the new Mrs. de Winter as she was bombarded with Rebecca's greatness as a sign of her own faults.

Memorable Quote: I wanted to go on sitting there, not talking, not listening to the others, keeping the moment precious for all time, because we were peaceful all of us, we were content and drowsy...In a little while it would be different, there would come to-morrow, and the next day, and another year. And we would be changed perhaps, never sitting quite like this again. Some of us would go away, or suffer, or die, the future stretched away in front of us, unknown, unseen, not perhaps what we wanted, not what we planned. This moment was safe though, this could not be touched.

It feels I could talk about this story ad infinitum. The depth of the language, the complexity of the plot, the masterful way du Maurier manipulates the subtleties to hide and reveal...but I'll leave it at this: READ THIS BOOK