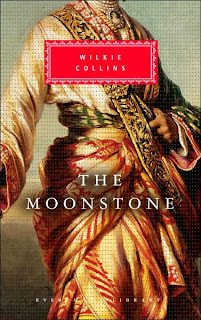 Plot Synopsis
A yellow diamond with a rich history is stolen from a young girl's bedroom. What follows is a whodunit of extraordinary detail and tone.

My Thoughts
Wilkie Collins' The Moonstone is widely regarded as the first piece of detective fiction. Including an intelligent, eccentric detective, a gem stolen after a party in a country manor, and of course opium, I can feel the beginnings of the popular and Gothic mystery in its pages.

But it isn't the original plot line that captivated me; it is the characters. The Moonstone contains some of the most intriguing characters I have ever read. From the humble servant Gabriel Betteredge to the prissy and self-righteous Drusilla Clack to the opium-addicted Ezra Jennings, these are people you want to know about, and they speak directly to you as The Moonstone is an epistolary novel with multiple characters recounting firsthand events in their unique tone of voice.

I won't go into detail on the plot as I would hate to spoil it for any readers, and I honestly believe these characters should be discovered through reading the novel. Plus, the other reviewers of this book have done a tremendous job introducing you to the plot and characters.

Memorable Scene: I can't get over the part in the beginning where Betteredge is describing how he chose his wife. He decided to marry the woman who kept house for him so that he didn't have to pay for her services. He believes "it will be cheaper to marry her than to keep her." Sexist but particularly hilarious to me because you can't help but love Betteredge.

Other Stops on the Tour for Wilkie Collins and The Moonstone


Other Reviews of The Moonstone
If I've missed yours, let me know.

If you haven't yet read this book, I recommend running out and picking up a copy now!
Posted by Trisha at 7:18 AM