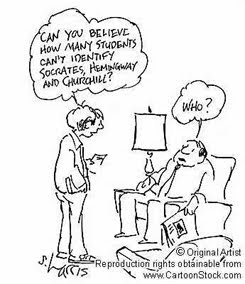 The Necessity of Literature Courses for College Freshmen and Sophomores

The current trend in English is to divide the program into composition and literature, a practice I am in support of as each deserves its own place in the curriculum.  For too long, English courses centered on literature, focusing its efforts on the creation of cultural background - shared experiences in reading - and neglected the skill of writing as differentiated from reading.  This focus left students ill-prepared to deal with the academic rigor of writing in non-English courses; apparently skill in book reports (the focus of many high school English programs) does not help one analyze the effects of eminent domain or critically discuss the ideological differentiation between The War of Northern Aggression and the Civil War.

I am not saying that literature does not help one think; obviously I am a proponent of reading.  I do, however, believe that the backseat composition took to literature in English programs for decades was detrimental to overall critical thinking abilities. Reading, of course, can be essential to critical thinking abilities, but writing (something other than a book report) forces those abilities to the forefront.  It is entirely possible to read a book without any serious effort of thinking.Unfortunate, but true. So, bravo for the major philosophical and pedagogical shift that gave composition its proper place in English programs.

Unfortunately, the pendulum swung too far in the other direction.  We have gone from the extreme of literature only to composition only with freshman and sophomore undergraduate English courses focused almost solely on composition: informative, analytic, and persuasive essays.  And now our students are learning how to write but forgetting how to read.  The removal of literary works from the first two years of English means that students rarely have to read anything other than their textbooks, meaning of course that only a very, very small percentage are reading at all for school.  And reading for pleasure?  Don't get me started.

I believe the most recent statistic is that roughly 50% of Americans never read for pleasure, only one in four Americans even read a book in the last year, and the average is only four books a year for those who do read.  Statistics like this make me even more adamant about the necessity for including literature in the undergraduate curriculum.

The problem as I see it is that the differentiation between literature and composition can be a false barrier.  If we think of Writing with Literature rather than Writing About Literature, we can easily fuse reading with composition studies.  Students can read Zora Neale Hurston's Their Eyes Were Watching God, but instead of then assigning a paper about the book, instructors can assign a paper about the role of African-American female writers during the Harlem Renaissance.  Or a paper on the difficulty of maintaining the individual self while in a romantic relationship. The eventual paper may never even mention the book that was read.  Books are about ideas, and ideas spark writing.

By separating Book Reports, Book Reviews, and Literary Criticism from the act of reading, we can re-merge reading and writing, and in my opinion, our students will be better for it. Not to mention the fact that including literature in the curriculum exposes students to cultures other than their own, to new ideas and experiences, and to one of the most wonderful hobbies a person can have.

I could go into all the reasons reading is important, but I think I would preaching to the choir here.  So instead, I'd like to hear from you.  Do you think it is important to include literature in freshman/sophomore undergraduate writing (er...English) courses?  If so, why?  If not, why not?