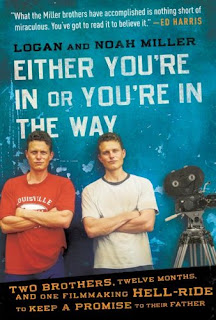 Logan and Noah Miller want to make a movie.  They have no money, no contacts, no education, no experience, and no chance.  But damned if they didn't kick some serious butt and succeed.  The book is called Either You're In or You're In the Way, and the title seems to be a driving motto of these identical twins.  They schemed, they worked hard, they back-alley schmoozed, and they managed to make their movie.  The book chronicles their experiences in directing, producing, starring in, and pretty much doing everything for the movie Touching Home.

The writing is choppy, fast-paced, blunt, and I thought it was perfect for this particular story.  The reader is brought into an edgy world and the language used mirrors the harsh reality.  Alternately street-hustlers and poets, the Miller brothers blend everyday language with philosophical genius.


Staring west across the desert and beyond that to the unseen world where the sun was heading filled us with a sense of power and a sense of the everlasting; that time holds no preference for anyone, it moves with or without you, and while you're here, you might as well be making good time and going after your dreams.

And not even a page later:


We wanted to film spring training.  The real deal.  Professional ballplayers.  Not some fake re-creation with actors swinging sissy sticks.  To accomplish this, we needed the okay from teh City of Tucson, and if humanly possible, the okay from the Colorado Rockies.  The former was likely, the latter, extremely unlikely.

I loved this mix, and even more so than the story - which I'll get back to in a second- it's what kept me reading.

The story itself is inspiring; the brothers' ultimate success is an intriguing mixture of determination, luck, and (I have to say it) balls.  Being a pathetically non-confrontational person myself, I was embarrassed by and envious of their ability to put themselves out there...dramatically...storming backstage to confront Ed Harris, blurring the truth about money to secure cast, crew, and other financiers, and even shooting scenes on location without the permission of the muckety-mucks.  It was downright impressive.

While the book is about making the film, the film itself is about the brothers' relationship with their alcoholic, homeless, and often imprisoned father.  I haven't seen it yet - it comes out April 30!!!! - but from what I gather, this isn't your typical oh-we-had-it-so-rough-with-our-father film.  The boys' relationship with their dad seems a bit atypical.  While their struggles are portrayed on the screen and are often heart-wrenching, I'm thinking that the love the boys had for dad and vice versa will maintain a strong appearance.  Logan and Noah Miller never gave up on their father, and that is unusual in a film (in a reality) of this nature.

Read the book.  And of course, go see the film.  I certainly plan to.
Posted by Trisha at 7:24 AM