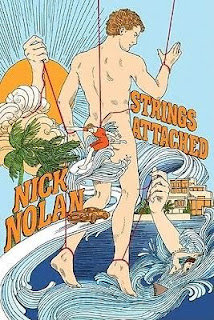 The Short and Sweet of It
Jeremy's mother is an alcoholic, and when a bender from hell lands her in rehab, Jeremy goes to live with his exceedingly rich great-aunt. Moving from poor to posh is tough enough, but Jeremy is also struggling with his sexuality and some unanswered questions about his father's death.  It may seem a bit convoluted but Nolan weaves these stories together in such a way that they form an in-depth backdrop for a coming-of-age story.

Jeremy's story is the story of Pinocchio, except Jeremy wants to be a real man, meaning of course a successful, composed, attractive, straight man. While the allusions to Pinocchio weave throughout the book, the reader is never hit over the head with them.  Instead, Nolan artfully infuses Jeremy's story with elements from the fairy tale: character names, mentions of wood (in a totally non-sexual way), place names, and of course plot lines.  Honestly I didn't even catch all of the references until I read the Author's Notes at the end.

Throughout, this is a coming-of-age story, a tale featuring a protagonist who has been controlled his entire life by his surroundings, his situation, his fear, his mother, and eventually his aunt (our very own Gepetto).  Jeremy's struggles with family, friends, and sexuality provide the necessary exigence for him to become a real man, just not in the way he expected.

The only thing I didn't like about the book was the head-hopping.  I'd be reading and suddenly I'd be inside another character's brain. Sometimes I'd have to go back a paragraph or two to figure out what was going on.  Generally speaking I don't mind multiple viewpoints in a novel, but this wasn't multiple first-person narrators; it was third-person limited omniscient jumping about among characters.  Obviously I'm not a fan of that.

Originally, Nolan wanted to write a young adult novel for gay teens, but as he was writing he found that some explicit sexual content was needed for authenticity, so he changed his focus to a more adult audience.  I would argue, however, that this is still a great book for teens, the more mature ones anyway.  While the sex is explicit, I don't think it's anything outside a normal teenager's knowledge, and it's not overly pervasive or extraneous.

A Guy's Moleskine Notebook; eZine articles; Out in Print Queer Book Review; Dirty Sexy Books;
Posted by Trisha at 6:29 AM