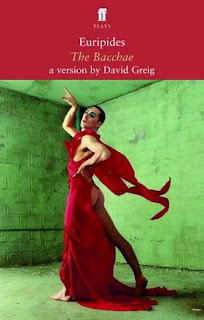 The Short and Sweet of It
Dionysus wishes for Thebes to recognize him as a god, but the current man-in-power, Pentheus, refuses to acknowledge him.  As a result, Pentheus and his whole family are punished rather remarkably. The sort of over-the-top punishment doled out in this play is one of the reasons I adore ancient Greek texts.

A Bit of a Ramble
Dionysus is alternately the most awesome god ever, the most ridiculous, and the most dangerous. He seems to be the god of excess, of drunken orgies and animal instincts; but along with the sexier versions of excess comes violence and rage and emotion without logic. It is to Dionysus which can be credited the reality of ecstatic frenzy (think arms in the air, speaking in tongues type religion, but with lots and lots of alcohol). When Dionysus begins his evil plan to reveal himself to Thebes, he seduces/possesses the women of the town who run off into the woods with him.  This pisses Pentheus off since those women are his relatives, including his mother.  Understandable really, I mean who wants their mom taking off with some playboy into the woods for irresponsible sex and drinking?

Pentheus determines to get the women back and drive Dionysus, who he refuses to believe is a god, from Thebes. But come on folks, as we all know, you don't mess with a god - and you certainly don't deny him his existence in the first place. Mucho badness befalls Pentheus and his family.

The central theme of The Bacchae is arguable. Certainly the convergence of religious tradition and rationality is at work in the text, represented by Dionysus and Pentheus; however, to say that the play favors one over the other seems questionable.  While Dionysus "wins" in the play, both characters are presented as equally undesirable. Dionysus is manipulative and conniving and Pentheus stubborn and delusional. Personally, I believe the play supports the immovability of mankind's belief more than it supports any religious doctrine. The truth of the existence of gods is secondary to people's belief in the existence.

On a side note, the book I have does not feature that startling cover featured above, but I loved that cover too much not to use it. In the play, Dionysus has Pentheus dress in women's clothing to spy on the frenzied women in the forest, and I just love that the above cover shows this. 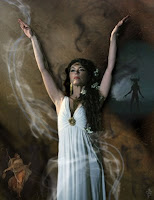 The Filmic Connection
The second season of TrueBlood features a Maenad, sort of a concubine/priestess of Dionysus aka Bacchus aka Bromius aka and the list goes on and on.  The TrueBlood version of Dionysus is definitely one of the more dangerous interpretations of him. Portrayed as a bull god whose spirit - or that of his maenad - possesses people causing indiscriminate sex and violent, Bacchus revels in the darker, instinctual side of humanity. Within The Bacchae, he's a bit more tame; if you can call someone who causes a mother to rip off the head of her son tame.