Book Review: House of the Dead 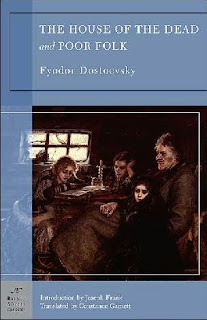 Who is Fyodor Dostoevsky
Dostoevsky was a Russian writer who lived between 1821 and 1881.  His claim to fame revolves around his novels which delve into the psychology of those on the fringe of society.  Early on he focused on the lower classes.  In his first novel, an epistolary called Poor Folk, Dostoevsky wrote about the harsh conditions facing the poor. While he continued to write about the more disenfranchised or "unfortunate of society", his most famous works, Crime and Punishment and The Brothers Karamazov, explore the morality of murder.

Dostoevsky's interest in and knowledge of the minds of murderers may be the result of the time he spent in a Siberian prison.  In 1847, he joined the Petrashevsky Circle, a group of intellectuals who discussed Western philosophy and literature.  While this sounds fine and dandy, the group opposed aristocracy, which was a surefire way to piss of the tsarist Russian government.  In 1849, many members of the Circle were arrested, including Dostoevsky, and he was sentenced to four years in prison and another four years in the army. 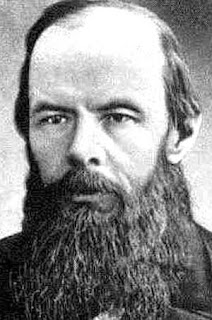 The Short and Sweet of It
The House of the Dead is a semi-autobiographical accounting of his time in the Siberian prison.  While many of the stories, experiences, and even the people are true-to-life, Dostoevsky created a fictional narrator, Alexandr Petrovich, who is serving ten years for murdering his wife. By creating a fictional character, Dostoevsky was able to insert biting political and social commentary into his writing; quite the brave thing to do after he had already been imprisoned for disagreeing with the government.  Reading like a well-lived man recounting memories, The House of the Dead is a beauteous philosophical ramble that will stay with me for a long time.

A Bit of a Ramble
There is beauty in language, and I must admit that sometimes I forget this as I read less literary books.  Let me be clear, I love a wide variety of books, and I feel no shame in reading works which are written in simple terms with standard cadence, no shame in the guilty pleasures.  And yet, when I pick up a book like this, a classic novel that creates a unique rhythm and high-style to the language, I am moved.  In this instance, that is in part due to the translation; after all, I'm not reading this in Russian. But I find that classic works have a greater likelihood of complex prose than modern novels. Literature became standardized for the masses, and the language of literature became more normalized, more like everyday speech. Sometimes I miss the nuanced language of the classics, the artful and articulate weaving of words, that can be lacking in popular contemporary novels.

Outside of the language, The House of the Dead also places a feast of philosophical dishes before readers:
the relationship between character and freedom, the necessity of purpose, the difficulties in assessing and punishing crimes, the importance of choice, appearance versus reality, the gap between the classes, the strength of hope, and the list goes on and on.

He reflects through anecdotes, not abstract thought, relating specific events, causes and effects, that happened before his eyes.  These are not the musings of an intellectual constructing theories while reclining in his armchair or beside a flowing stream. These are the reasoned observations of one who is living it, and yet partially removed by his difference from the masses. Dostoevsky entered prison a gentleman, a leisured thinker, and found himself surrounded by criminals of the lower class.  His inclusion in the life of the prison did not transcend the class difference, and so Dostoevsky and the narrator he constructed for the novel are at once participant and observer.

I find myself rambling here, mixing the book and reality in much the same way Dostoevsky has, but in my defense, I can not review in a normal fashion.  The plot is nonexistent, the characters many and sporadic, the themes varied, etc. While the story is told chronologically from Petrovich's first day in prison through to his last, there is no real conflict. What Dostoevsky has done is create a portrait, a multidimensional complex image of life in prison.  He moves from event to event from person to person, offering a snapshot of individual instances and inmates, that when combined, form a comprehensive whole that is rather powerful.

I could relate for you the myriad scenes and quotes that captured my mind, the stories that moved me or challenged me, for there were many.  But instead I am going to implore you to pick this book up, to read for yourself the stories of the eccentric, unique, and oddly charming convicts that peppered Dostoevsky / Petrovich's life while he was in prison.

For an absolutely fantastic review of this book, check out The Lectern.

Jandy's Reading Room; Read it online at Google Books; Check out the rest of the Russian Imperial Tour at The Classics Circuit.

Question:  What other books should I read that offer a complex portrait rather than a focused story?
Posted by Trisha at 5:06 AM