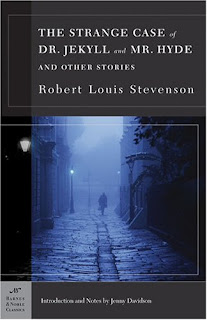 The Short and Sweet of It
Mr. Utterson, a simple lawyer and good friend, takes it upon himself to discover the mystery of his friend Dr. Jekyll's odd will in which he leaves everything to one Mr. Hyde, unfamiliar to Mr. Utterson. His desire to aid his friend leads him on a journey of strange discovery.

A Bit of a Ramble
I don't think it much of a plot spoiler to reveal the dual identity of Dr. Jekyll. I'm pretty sure most people know that Jekyll and Hyde are one-and-the-same, Hyde being the "dark side" of Jekyll who brought on the transformation through chemistry. If you did not know this, huh....really? :)

Reviewing a book many have read and most know about is difficult for me. Then again, this was my first reading and I was quite surprised by the book. My imagination concocted a story with Jekyll as the protagonist, the reader following him as he makes his discovery, transforms for the first time, undergoes spiritual questioning and torture, et. al. I believed the tale to be focused on Jekyll's experiences existing as both himself and his alter ego. The book, however, is more like a tale told after the fact by one not directly involved in the main spectacle.

Mr. Utterson is the character we follow, the one whose thoughts we are privy too. Our information about Jekyll and Hyde comes to us from Utterson's observations, a friend's letter, and Jekyll's own letter. We do not watch the main event; instead we are removed from it, only hearing about it well after the fact. I have yet to decide how I feel about this (I finished the book about three minutes ago at this point).

This was a fast read for me; I went through it one sitting. Part of the reason for the quick speed is the delightful atmosphere of the novel which is wonderfully sinister and moody. Another reason is the general lack of activity. Not much happens, and that which does happen is told simply and shortly, primarily because it is revealed in summation by characters who witnessed the event.

As is often the case with classic novels, the language has an art to it that is at once strange and beautiful for a contemporary reader. Artful prose is one of the many reasons I love classic literature so very much. If you haven't yet read this book, I definitely recommend doing so, and if you are worried you already know too much about the story, you don't....

On a side note, the version I have is not the cover pictured here.

DUELING MONSTERS
I read this for the Dueling Monsters readalong, hosted by Heather at Age 30+ and Jill at Fizzy Thoughts. Heather's site hosts the readalong for Jekyll and Hyde while Jill has the readalong for The Picture of Dorian Gray by Oscar Wilde which I re-read this past week but originally reviewed back in Spring. My official post for the readalong(s) will be tomorrow.

The Filmic Connection
There are so many visual interpretations of the Jekyll and Hyde story that to list them all would take ages. There are straight-up adaptations, re-envisionings based on technological advancements, children's versions, and even musicals. I do hope to watch some of them in the near future.

Question: Have you seen any of the films? Suggestions on which I should watch?