Book Review: HP and the Prisoner of Azkaban

The Short and the Sweet of It

Harry, Ron, and Hermione are back at Hogwarts for their third year. After defeating Voldemort's quest to possess the sorceror's stone and to open the Chamber of Secrets, the three young students surely wish they could just have a normal year; unfortunately, once again they are thrust into a dangerous situation. A wizard accused of murder and conspiring with Voldemort has escaped the wizard prison of Azkaban, and before he left, the guards overheard him muttering, "He's at Hogwarts".


A Bit of a Ramble
In my review of the first two books in the series, I said that re-reading these books for the 12th time has reminded me of the relative immaturity of the first books compared to the later in the series. My guess is that Prisoner of Azkaban is where I finally fell in love with the series. While the book still contains the wonderfully creative action of the first two, in this installment, readers start to get the history of characters, to see the epic timeline of the world Rowling has created. Plus, we get Sirius Black, a character I find extremely intriguing and actually wish had received more attention.

While the story still isn't as complex as later installments, the foundation is there. Here we start to get a real feel for the time before Harry. Lupin, Black, Potter, and Wormtail's history provides a great foil for the current relationship between Ron, Harry, and Hermione, and in this book and in future installments, I found myself comparing the groups of friends.

We also get to see the more complex capabilities of magic with the introduction of the Marauder's Map and the Timeturner, two devices that I really enjoyed. The Marauder's Map allowed the holder to see where everyone was inside Hogwarts, and the Timeturner, obviously, allowed the user to go back in time. These objects stand out to me as indicators of a world of magic outside of what they are learning at school. Just like with the history, this inclusion helped fill in the spaces, broaden the map, of the world of Harry Potter.

Memorable Scene: I find this scene rather poignant.

Because Harry knew who that screaming voice belonged to now. He had heard her words, heard them over and over again during the night hours in the hospital wing while he lay awake, staring at strips of moonlight on the ceiling. When the dementors approached him, he heard the last moments of his mother's life, her attempts to protect him, Harry, from Lord Voldemort, and Voldemort's laughter before he murdered her...Harry dozed fitfully, sinking into dreams full of clammy, rotted hands and petrified pleading, jerking awake to dwell again on his mother's voice.

"But you believe us."


"Yes, I do," said Dumbledore quietly. "But I have no power to make other men see the truth..."

Many times while reading, I do so wish that some character had the power to make other men see the truth.

The Filmic Connection
Watching the HP films is something of a painful experience for me, especially the earlier ones before the young actors learned that acting is a subtle activity. At this point in the films, the acting is still quite a bit over-the-top for me, at certain times even just painful to watch with cringe-worthy vocalizations. Thank heaves for Gary Oldman as Sirius and David Thewlis as Remus Lupin; I really enjoyed their performances. 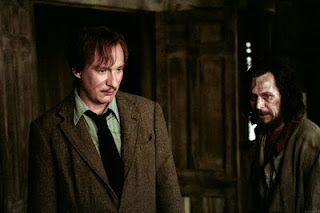 A quite large compilation of reviews for this book can be found here.
Posted by Trisha at 5:10 AM