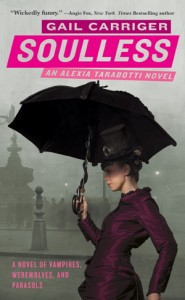 The Short and Sweet of It
Alexia Tarabotti resides in a brilliantly mannered Victorian London where vampires and werewolves form a small chunk of the aristocracy. As a preternatural, one who is soulless, Alexia possesses the ability to counteract the supernatural elements of those she comes in contact with. She also enjoys treacle tart, verbally sparring with Lord Maccon, and having a parasol handy.

A Bit of a Ramble
I have re-read very few books this year, much less than normal, but I could not resist re-reading this one. I first picked it up for the Readathon in October and sped through this and the next in the series, bemoaning the fact I did not have the third waiting on the shelf. But then I ran into a problem, I loved it so very much and read it so very fast, I had absolutely no clue how to go about reviewing it. And so it languished on a shelf, bookended by Changeless, the second in the series, and the Prisoner of Azkaban, neither of which I have gotten around to reviewing yet.

After finishing The Odyssey, I spent a good ten minutes staring blankly at my shelves trying to figure out what book I could read which would be fun, light without being fluffy, and absorbing. Finally, I gave in and expanded my parameters to already read books. The minute I saw the two Gail Carriger novels, I picked up Soulless and started reading. I am so glad I did, and I fully intend to read Changeless next.

The novel combines so many elements I enjoy: paranormals, romance, Victorian London, steampunk, overblown propriety, eccentricity, comedy, sex, and on and on and on. To even attempt to discuss the myriad of wonderfulness would require much more time than I have to write or you desire to read I'm sure, so I'll just hit on a few.

Alexia defies many of the social expectations of women, and yet she adorably abides by and supports many of the social conventions, finding an improper cravat rather horrifying yet willfully speaking her mind to anyone, including the Queen. I have always enjoyed the simultaneous adherence to and defiance of social conventions displayed by stronger female characters in classic literature, particularly 19th century literature. The seemingly contradictory behavior allows the character to be both proper and independent which I find extremely cute (in a totally non-condescending way). To me, the combination is a wonderful eccentricity of character.

For example, this lovely scene:


Lord Maccon shifted, drawing her closer. He let go of her hands and curved one of his up into her hair, tangling his fingers in the heavy curls. Alexia was certain, with a tiny modicum of offended sensibility, that he was probably mussing it up most dreadfully. He was using the maneuver to direct the angel of her head in harmony with his wishes. As his wishes appeared to prescribe further kissing, Alexia decided to let him have his way.

As evidenced by the above passage, Alexia's counterpart in the story is Lord Maccon. He is an Alpha werewolf who also heads BUR, a sort of supernatural CIA. More importantly, he is dead sexy. A bit rough around the edges, and downright deadly in wolf form, Lord Maccon is, in my opinion, a perfect pairing for Alexia. The two share dominant personalities and a love of challenges, making their romance in this novel much more exciting than many a love story I've read in the past.

During their first passionate encounter, Alexia and Lord Maccon are interrupted by Maccon's second in command, Lyall. As Lyall and Maccon talk: "Alexia blinked stupidly at the Beta from around the earl's upper arm. Her heart was doing crazy things, and she still could not locate her kneecaps. She took a deep breath and put some serious attention into tracking them down."  I just love it.

While both passages I've included here directly relate to the romance portion of the story, I feel I should make it clear that at its core this is more paranormal steampunk mystery than romance novel. Alexia's driving motivation in the book is discovering why vampire roves and werewolf loners are going missing and why unaffiliated vampires are showing up in London. Her main concern is not getting a man. Actually, she is wonderfully unconcerned about her marital or romantic status.

If you haven't picked this series up yet, I highly recommend you do. The writing, the plot, the characters, the setting, it's all beautifully done.

So very many people have reviewed this book, that I would just direct you here.
Posted by Trisha at 5:51 AM