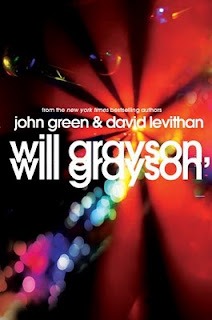 The Short and Sweet of It
Will Grayson and will grayson lead separate lives until one night and one person bring them together. Despite the possibility for kitsch, the book remains sincere, hilarious, and highly worth the money I spent right before Christmas. On myself.

A Bit of a Ramble
The story alternates between the two Will Graysons' points of view, and Levithan and Green really managed to pull this off well. The voices are distinct, each Will is well developed, the two are very different from each other, and the authors even used different format styles for each Will's chapter (will's chapters are entirely in lower case). In other words, keeping up with who's narrating is not a problem.

Will Grayson is straight, a wee bit morose, and best friends with Tiny Cooper who is the opposite of morose. A very large, very gay high schooler, Tiny is also a big time romantic, overly altruistic to those around him, and a football player. The big event in this book is the musical, Tiny Dancer, which was written, produced, directed, and starred in by Tiny himself. Oh, and the musical is about the life (well, the various and sundry love interests) of Tiny.

will grayson is gay (but he hasn't come out), depressed, and solitary. He lives in the suburbs with his mother (not the best relationship), and his only real contact with other people is the online relationship he has going with a boy named Isaac. Isaac is the only one will can really talk to, in part because he's the only one who knows will is gay. When the two finally decide to meet face-to-face, will heads in to the city, and in a serendipitous event, he runs in to Will Grayson and Tiny Cooper.

Writing those two paragraphs felt like trimming myself down to one paragraph. Each Will Grayson reads like a complete person, and I didn't really go much beyond the surface of what's going on and who they are in these tiny little paragraphs. I was really impressed while reading with the depth and complexity of the characters. Even while reading about Person 1 at Event A, I knew that Persons 2-5 were busy elsewhere, living even when I couldn't "see" what they were doing. Hmmm...I hope that made sense. It's not often that I feel the "realness" of characters quite so much.

The set up of the story is clever without feeling contrived, and I have to admit that I was expecting contrived - two Will Graysons accidentally meet up? That definitely has the makings of a kitschy feel to it. But the story, throughout, remained very sincere in my opinion. I didn't really have to stretch my mind for believability (until the end, but more on that later). Another point in favor of the story is the hilarity. I laughed. On a lounge chair, by the pool, with family and a whole bunch of strangers around. What can I say? It was a funny book.

I did have a few twitchy moments while reading. For one, the book revolves around Tiny Cooper, not the Will Graysons. This seemed very odd to me, considering the title of the book and the narrators most definitely point to the Wills being protagonists. And they were for the most part, but essentially the plot line centers on Tiny. The end, which is the second twitchy part for me, supports this strangeness as it fully focuses on Tiny. It was also the only part of the book I found pretty much unbelievable. It was almost but not quite an eye-rolling moment.

Overall though, these two points didn't really detract from my love of the book. Reading this reminded my of my love for John Green and David Levithan and was a slap in the face about reading more books by authors I enjoy instead of my strange tendency to read new authors all the time.


Disclosure: Will Grayson, Will Grayson made the short list for the Indie Lit Awards: GLBTQ and I am a panelist for that category. This review in no way reflects which of the shortlisted books will get my vote for best of 2010.