Book Review: The Subjection of Women 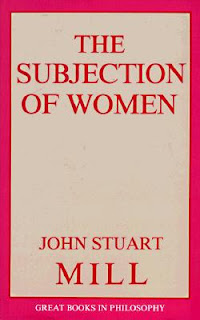 The Short and Sweet of It
In a rather accessible extended essay, Mill argues for the emancipation of women both for the betterment of society and the personal benefit of women.

A Bit of a Ramble
What struck me most about Mill's essay is his clarity and conciseness. For example, directly on the first page of the extended essay, Mill lays out his thesis:


The principle which regulates the existing social relations between the two sexes - the legal subordination of one sex to the other - is wrong in itself, and now one of the chief hindrances to human improvement; and...it ought to be replaced by a principle of perfect equality, admitting no power or privilege on the one side, nor disability on the other.

What follows this direct - and entirely supportable - opinion is an organized, clear, and interesting look at the subjugation of women to men and the limits it places on progress.

Mill's most used metaphor is that between master and slave, and his use of this analogy is both appropriate and rather well argued. Mill lived in a time when the (predominantly) last form of slavery was abolished, and by drawing comparisons between the enslavement of the African people by the West, he provides a solid foundation for arguing against the enslavement of women. He also uses historical examples, primarily Greece and serfdom, to further this connection. Brilliantly, in my opinion, he starts out this analogy by arguing against the popular belief that the subordinate position of women is "natural":


But was there ever any domination which did not appear natural to those who possessed it? There was a time when the division of mankind into two classes, a small one of masters and a numerous one of slaves, appeared, even to the most cultivated of minds, to be a natural, and the only natural, condition of the human race. No less an intellect, and one which contributed no less to the progress of human thought, than Aristotle, held this opinion without doubt or misgiving, and rested it on the same premises on which the same assertion in regard to the dominion of men over women is usually based, namely that there are different natures among mankind, free natures, and slave natures.

I can't stress enough how much I think this parallel would have played upon the emotions of Mill's contemporaries, particularly in America where slavery had been abolished so recently. Outside of this extended metaphor, Mill makes some very particular arguments regarding the necessity of freeing women from their subordinate position: namely, that to prohibit half the population from the pursuit of intellectual advancement is detrimental to society as a whole.

In order to support this thesis, he makes what I feel is a very relevant, very obvious, and very appropriate counterargument. Mill states that many (men and women) do not believe women capable of engaging in the sort of intellectual activities which would benefit society. First, he makes the obvious insight that we can't know unless we let women try. Then comes what I feel is both clever and obvious: Allowing women to attempt professions from which they have been excluded does not mean they will succeed. The world is rather naturally governing in this way:


...in which the unfitness is real, the ordinary motives of human conduct will on the whole suffice to prevent the incompetent person from making, or from persisting in, the attempt (17).

The anxiety of mankind to interfere in behalf of nature, for fear lest nature should not succeed in effecting its purpose, is an altogether unnecessary solicitude. What women by nature cannot do, it is quite superfluous to forbid them from doing. What they can do, but not so well as the men who are their competitors, competition suffices to exclude them from (24).

Competency, not gender, determines success in any particular field, and so Mill, rightly, asserts that the problem is not a belief that women are incapable, but a fear that they are. I could probably write about three thousand more words on the various arguments Mill proposes, but in the interest of time, I'll just skip to the funny bits.

I really enjoy it when authors of SERIOUS tomes with IMPORTANT topics inject a bit of the snarky into their texts. Check out the following selections:


There are, no doubt, women, as there are men, whom equality of consideration will not satisfy; with whom there is no peace while any will or wish is regarded but their own. Such persons are a proper subject for the law of divorce. They are only fit to live alone, and no human beings ought to be compelled to associate their lives with them.

But (it is said) there is anatomical evidence of the superior mental capacity of men compared with women: they have larger brains...If it is inferred merely because a woman's bodily frame generally is of less dimensions than a man's, this criterion would lead to strange consequences. A tall and large-boned man must on this showing be wonderfully superior in intelligence to a small man, and an elephant or a whale must prodigiously excel mankind.

That just tickles my funny bone.

For those of you who want the down and dirty and as such skip to the last paragraph of a review (this is probably more discussion than review but there you have it), what you really need to know is that this essay is extremely accessible because of its clarity, important because of its subject matter, and entertaining because of the bits of snark. In other words, buy it.

Question: If anyone else has read this, I would love to hear which parts really stuck out to you.