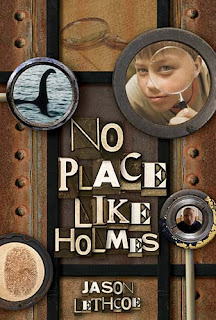 The Short and Sweet of It
Griffin Sharpe's visit to his uncle takes an unexpected and exciting turn when the two find themselves investigating a mysterious disappearance. His skills of observation honed and ready, Griffin is reminiscent of a young Sherlock Holmes, who happens to live in the apartment above Griffin's uncle.

A Bit of a Ramble
This book is adorable. And I mean that in an entirely non-condescending way. Griffin is a perfect young detective, displaying a keen mind and a kind heart. While his powers of observation and deduction are well beyond the pale for one his age, Griffin is still portrayed as a sweet, amiable kid - a feat I believe deserving of some applause for Lethcoe's writing ability. Creating that combination of intelligence and innocence takes great skill in my opinion. Griffin reads as a precocious but delightful thirteen year old.

The plot is fast-paced and exciting without relying too heavily on spectacle or melodrama. The clues Griffin finds and his conclusions deducted from them are explained, but briefly and simply in a way perfect for a middle grade fiction novel (or for an adult brain that's looking for light and easy).

I really only have two complaints. One involves a plot spoiler, so skip the rest of this paragraph if that bothers you. The novel maintains a middle grade level of violence until the end when suddenly death is a very real option. I wasn't a fan of this sudden turn to knives and stabbings and would have preferred the work stay consistently in the non-violent realm.

My second complaint regards religion. The son of a Methodist minister, Griffin's religious nature permeates the text, not necessarily dominating the tale, but still maintaining a consistent presence. Griffin calls upon God in his hour of need and despairs of his Uncle's lack of belief. There were a few moments that felt trite, unnecessary and cliched. Then again, I have to admit a bit of a prejudice when it comes to religion in novels; if it's not central to the story, I find the inclusion annoying.

I first requested the book because of its connection to Sherlock Holmes. I had just read Dr. Jekyll and Mr. Holmes and taught the modern film Sherlock Holmes, so I was on a Holmesian (Sherlockian?) bender. While Sherlock doesn't have a large role in the book, he is still a constant character. Snodgrass suffers from severe bouts of jealousy against his competitor, in part fueled by a callousness on Holmes' part when Snodgrass was a child. And of course, Holmes flits around in the background throughout the story. And yet again, a Sherlockian (Holmesian?) book has me slapping my forehead over my neglect of the original canon. I really must rectify the situation soon and read some Holmes.
Posted by Trisha at 5:35 AM