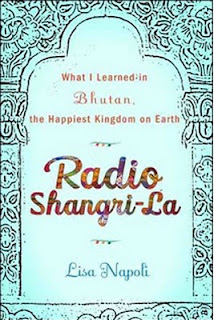 
The Short and Sweet of It
Napoli's memoir of her love affair with Bhutan, the happiest kingdom on Earth, is exactly what a memoir should be: personal without being self-aggrandizing, informative without being overly complex or boring, and thought-provoking without being cloying.

A Bit of a Ramble
Travel-writing-type-memoirs have left a bad taste in my mouth recently. Many I've read have focused more on the author's portrayal of self - particularly a hipster sort of too cool self - than they have on what I feel is the real point: a discussion of personal growth through an authentic connection with place. Radio Shangri-La, on the other hand, reminded me of why I used to love reading about a person's experiences traveling.

Napoli's motivation to travel to Bhutan as a consultant for a newly formed youth radio station was perfectly spontaneous. While she discusses her exigence - a dissatisfaction with life - she doesn't harp on it, which was something which annoyed me greatly when I tried (and failed) to read Eat, Pray, Love. Those who go on journeys as a way to up the ante in their life fascinate me, and I enjoy hearing about their general malaise which serves as an impetus for adventure. I do not, however, like whining. Whining, actually, is one of my pet peeves. Hearing those who have it pretty damn good complain about how ordinary and unsatisfactory their lives are gives me little twitches and a strong desire to bitch-slap. Napoli, thank Buddha, was not like this at all. Her comments on the why of going are short and to the point. Then she focuses on the real meat of the story - Bhutan.

But before we get to Bhutan...the first in a double-handful of selections which caused me to actually nod my head while reading (don't you love physical reactions to books?):


Gazing intensely at people I hardly knew reinforced how rarely I looked directly at the people I did know. We were all perennially distracted, attempting to triage the various competing demands on our time, multitasking our days away.

Here is a sentiment I very much relate to: not because I am a multitasker, but because I am not, and I do so wish other people would stop and enjoy the moment with me. I like slowness and one-on-one time and finding images in clouds and leaving my phone at home with my iPod. Now I won't claim to be some sort of Walden Pond-style throwback. I love my technology, and I spend a great deal of time living in the digital world, but I definitely wish we could unplug more often if for no other reason, than to enjoy each other.

But back to Bhutan, where technology isn't quite the given it is here in America. Much of Napoli's book, both in exposition for her trip and in reflection upon the culture there, is taken over by an analysis of the relationship between media exposure and cultural changes. As Napoli says,


When television beams a window on the world - the possibility of other - right into your home, it's hard not to become enthralled. Or, at least, intrigued. Those images sure get you thinking about what you have, and what you don't.

Many of the people Napoli meets have distorted images of what life in the West is like because of their exposure to Western television shows. While they know that life probably isn't exactly like it is portrayed on television, that vision still affects their imagined reality, an issue which becomes quite important later in the book.

I could go on and on about the impact media has on culture, but back to the book. Napoli's experiences in Bhutan are vivid: she engages the senses through descriptions of wondrous vistas, flavorful food, unique smells, and the heart of the people. My favorite part, though, would have to be the intriguing view she provided of the politics and history of Bhutan. Which is kind of weirding me out. At least the political part is. Generally speaking, I'm not in to politics. Most of the time I find them disheartening. But Napoli's explanations of Bhutan's move from monarchy to democracy fascinated me. She offered enough detail that my appetite was whetted, especially since this monumental change was not a grassroots revolution. Quite the opposite in fact, it was the monarch himself who incited the change much to the displeasure of the population who loved their king. I find this so intriguing that you can bet I will be reading more on the subject.

Writing this has definitely brought about a realization: I want more Bhutan. Napoli has me wondering, imagining, and curious to know more about this small country which has undergone such tremendous change in the last half-century. I'm not sure if I should thank her for it or just shake my head and point to my already overflowing TBR pile.

Giveaway: The wonderful people at Crown are offering me two copies of the book to give away to my readers, so if you are interested, leave a comment and include your email address! Unfortunately, the contest is only open to those in the US and in Canada.

Book Drive: If you would like to help bring books to Bhutan - which you should - head over to the Radio Shangri-La Book Drive and donate!

I am reviewing this as part of a TLC Book Tour, so you should definitely check out the other reviews!