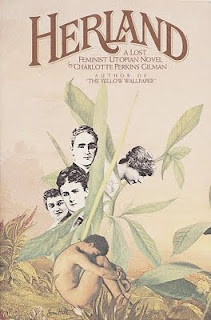 The Short and Sweet of It
Three men come upon an entire civilization cut off from the rest of the world: Herland. Thousands of years ago the men of this civilization died off, leaving only women. As a testament to human adaptability, these women spontaneously become able to perpetuate the species without the aid of men, and so began a culture of mothers, a civilization of women.

A Bit of a Ramble
First, I must get this off my chest: HOLY CRAP WAS THAT REALLY THE END? Okay, I feel a little bit better now. Now don't worry, no spoilers here. I just want to warn anyone going in to this book that if you like fully developed endings, this isn't the book for you. Jason of Moored at Sea let me know there's a sequel, but he also suggested the sequel is a bit frustrating thematically, so I am not sure I am going to read it.

Now back to reviewing the book. My overall opinion may seem condescending or trite, but I assure you it is not meant as such. To get to the point, I found the book cute. The story was cute, the narrator was cute, the characters were cute. Yep, that mixed-meaning, often used, rather vague term is what comes to mind. While the issues being presented are relevant, complex, and deep, most of that is due to the brain of the reader, not the writing of the author. The story itself felt relatively superficial. When I think about it, this is an interesting combination - superficial writing with thought-provoking issues. This superficiality combined with the rather charming and overly perfect characters equates to an opinion of "cute".

The utopian society Gilman created is too perfect. Apparently a world of women knows no strife, is dedicated to improvement, obsessed with motherhood, and in general an intelligent, progressive, polite, subtle, critical thinking, open-minded civilization. This sort of perfection bothers me as it suggests a superiority of females over males which makes as much sense as vice versa. I must admit, however, that this idealization of the feminine did not frustrate me as much as I would expect. While a bit nagging, it still offered a platform for an interesting discussion of the role gender expectations play.

I read this for the Year of Feminist Classics, and there's still time if you want to get in on the action.