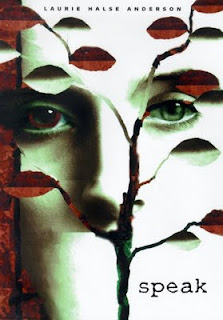 
The Short and Sweet of It
Melinda has a secret. A secret that has alienated her friends and left her incapable of reaching out to anyone. She has become silent, practically mute in the face of her inner turmoil. How can she find the strength to speak the truth of what happened and reclaim her life?

A Bit of a Ramble
I know that "accept" rating is going to really raise some eyebrows. This book is adored by many, many readers. I...liked it. I really did. I read the entire book in one sitting over an almost-two-hour stretch on my couch. I don't think I even got up to use the potty. The plot kept my interest. The voice sounded authentic. The topic is important. But danged if I didn't feel like the story was missing a "wow" factor. The Big Secret isn't exactly a mystery; although I knew what it was going in to the book.

Which brings me to one of my discussion points for this not-really-a-review: Plot Spoilers. I try very hard to know almost nothing about a book before I read it. I rarely read the back covers of books; I'll skim them to see if it's something I like. I do the same with reviews of books I haven't read yet - I skim them looking for sections that are response-based rather than summary-heavy. I think this book was so consistently reviewed by bloggers I read that I had no choice but to know The Big Secret. And a bit about the voice in the story. I do wonder if that colored my reading. Then again, doesn't everyone who reads this know The Big Secret within a couple pages?

A second possibility for my enjoyment-but-not-adoration may be that I found the school unbelievable. I have a really hard time believing high school is that bad and that divided. Maybe I really lucked out with where I went to school, definitely a possibility. I was a head cheerleader, the president of National Honor Society, the president of Spanish Club, and more a member of the "outcasts" than the popular crowd. I never hung with the jocks or the preps, which were really almost the same thing at my school. I can't name or picture a single student who was tortured in my four years of high school. People were made fun of - but even the quarterback of the football team was the butt of jokes. No one had it really really good and no one had it really really bad. But so many YA novels I read seem to indicate that there is this strict separation, distinct stereotypes - all the cheerleaders are dumb sluts, all the male athletes are mean assholes, all the preps are rich do-gooders. This book definitely placed people into clearly delineated and homogenous cliques. That bothered me quite a bit while reading.

But I don't want anyone to get the opinion that I did not like the book. I definitely did. I just didn't love it.