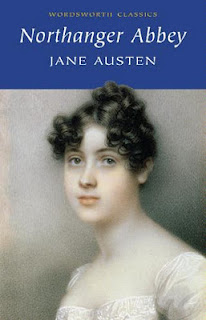 The Short and Sweet of It
Catherine Morland, young, innocent, naive, and enamored of Gothic novels, finds herself embroiled in a love story not at all straight out of one of her favorite books. What follows is a sweet, sometimes frustrating, humorous, and entertaining coming of age tale peppered with a bit of romance.

A Bit of a Ramble
When Catherine Morland accompanies her friends and neighbors, the Allens, to Bath, she finds herself in the middle of two quite distinct siblings: the Thorpes and the Tinleys. Isabella Thorpe is outgoing, forward, and self-centered, as is her brother John who has set his sights on Catherine. Eleanor Tinley is constant and sweet as is her brother Henry who has captured Catherine's heart. These two sets really provide the framework for Catherine to move away from her naivete to a more realistic view of the world. While the Thorpes overwhelm Catherine, she does not have the knowledge or experience to recognize their true intentions. They are exciting, flirtatious, over-the-top, and narcissistic. The Tinley's, on the other hand, are much more real, grounded.

This same dichotomy is seen in Catherine's impressionability regarding Gothic tropes. Her imagination causes her to see the world around her as a Gothic novel come to light, especially when she finds herself at Northanger Abbey, the "abbey" of it being so wonderfully Gothic. Her tendency to blur the line between fiction and reality, or reconstruct reality to suit a fiction, is oddly endearing to me, and felt pretty dang perfect for a seventeen-year-old. As is the case with all young people though, Catherine must come to realize the truth of the Thorpes, and so to must she come to realize the mundane quality of the abbey she has found herself in.

Most of the tale revolves around this idea: that Catherine needs to put aside childish fancy and see reality for what it is, much more simple and much less sensational than the stories she reads. I don't want this to come across, though, as a book that finds fault with imagination and flights of fancy. On the contrary, I think Austen has created a book that both stresses the importance of imagination and the necessity of not letting said imagination outweigh common sense.

And it's freaking funny people. Seriously, I already spoke a bit about the narrator in my discussion post on this book, but I really want to stress how funny I found this book. I definitely recommend reading this one, and a big thanks to those of you who suggested this be one of the first classics I read for my goals!

NOTES
This book counts towards Reading Goal #1: Reading Off My Own Shelves and specifically my Classics Reading Project.
Posted by Trisha at 5:03 AM