Book Review: Among Others 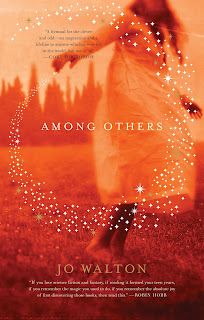 The Short and Sweet of It
Morwenna and her twin sister were raised by their insane mother who is also a witch. Recruited by fairies to prevent their mother from amassing too much power, the girls fight and in the process Morwenna is injured and her sister dies. And then the story begins....

A Bit of a Ramble
I was very excited when this book made the short list for the Independent Literary Awards; after all, I had heard such wonderful things about the book from various bloggers and I adored the cover. And I must say I was not disappointed. But I was surprised.

It's not often I read a story where so much nothing happens. The plot of Among Others is very difficult to pin down. More than anything, this reads like an insight into a character, not a "story". Of course, this is in part due to the structure of the novel which is written in a series of diary entries. The real story has already taken place by the time the book begins. What readers get here is the aftermath, the healing. Mori, the protagonist, ran away from her mad mother to live with a father she had never met who quickly sent her away to a boarding school where, honestly, the most exciting thing that happens is she joins a book club at the local library.

As I'm writing this, I'm worried you may think the book boring because of a lack of action, but it's far from it. I was riveted by the three levels this story had going: the tale of witches and fairies, the coming of age of our main character, and the consistent focus on science fiction-fantasy novels. This is not a heart-pounding thrill ride, but rather a quiet stroll, a walk at dusk complete with profound thoughts and reflection.

I really must direct you to Carl's review of the book over at Stainless Steel Droppings and Ana's at things mean a lot for true reviews. They artfully state what I would love to say, and I highly recommend reading their reviews.
Posted by Trisha at 5:16 AM