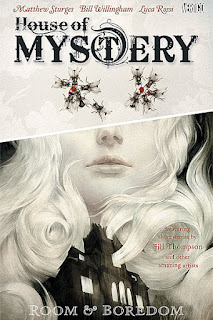 Series Reviews: This is the first

The Short and Sweet of It (from DC Comics)
Welcome to the House of Mystery! Filled with peculiar, otherworldly characters from all walks of life, this series from Matthew Sturges (JACK OF FABLES) and Bill Willingham (FABLES) focuses on five people trapped in the reality-warping House of Mystery, a supernatural bar where tales are the legal tender and only the finest storytellers are patrons! But how – and why – they're stuck inside is all just a little piece of the puzzle in this first volume, which collects issues #1-5 of the all-new acclaimed series and special bonus material. 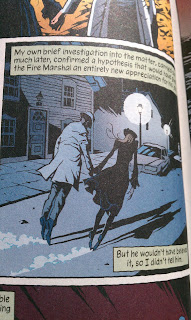 Stories within stories within stories. That's what I get from this first volume in the series. We have the overarching narrative involving the main character, Fig, and her journey to the House of Mystery, the house from her dreams which she's been obsessing over for much of her life; Fig's story includes some clearly awesome characters, only clearly awesome because 1) we don't know anything about them, except they are the Conception which is a cool name; 2) they float across the ground, dragging their toes; and 3) it looks like they have to be touching each other to stay tethered to Fig's world.


But we also have the story of the five (including Fig) bar patrons who can't leave the House; this story includes a masked character in a carriage who is the only one who can get the trapped residents out of the house. And finally we have the stories the bar patrons tell, which cross between fact and fiction and involve multiple worlds. Awesome.

It's not just the story that drew me in. The artwork is fantastically dark and detailed: 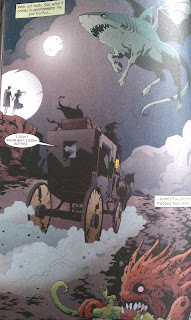 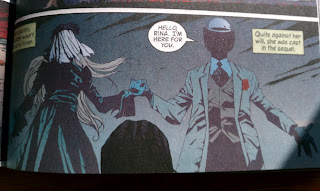 The randomness of some of the inclusions in the frames really got me. For example in the first picture above, what is up with the flying shark? Who knows? It's just part of the world. The inclusion of beasts and people and images in general that aren't directly discussed in the story is something I really appreciate. They add to the vision of a world separate from the story; they suggest that the story taking place is just one within a larger world, and I like that.

I don't have the rest of this series on hand, but I am definitely interested in reading the rest.

Question: Has anyone else read this series?