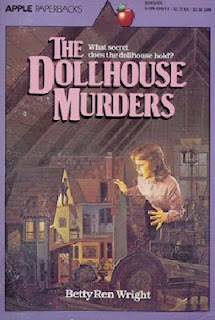 The Short and Sweet of It
Amy, twelve years old and searching for independence, finds a dollhouse in her aunt's attic, a perfect replica of the house her father grew up in, and the dolls are trying to tell her something, to reveal a secret long-kept, a secret about their murder.

A Bit of a Ramble
Spoiler Alert. I just hate it when whodunit has never been mentioned before the big reveal. To me, a mystery should be one you can solve while reading, but this story has a culprit never even hinted at throughout the entirety of the book. That just drives me crazy. End Spoiler.

The mystery here is intriguing: Years ago, Amy's aunt comes home one night to find her grandparents murdered and her brother (our protagonist's father) hiding in a closet. No one was ever arrested. Now, the dollhouse is trying to reveal the truth behind the murders. This isn't some missing jewelry type children's mystery; this is some serious stuff. And I appreciate that in my middle grade fiction.

The real heart of the story to me, though, is the subplot involving Amy and her brain-damaged sister Louann. Amy's mother expects her to watch her sister Louann, to spend time with her, a lot of time, like every day a lot of time. Amy wants her own life though; she wants her own friends, and she feels like Louann scares people away because of her difference. In order to get a break from Louann, Amy moves in with her Aunt Claire for a bit. Her mother and Louann make her feel very, very guilty about this. The "Am I My Brother's Keeper?" story is nothing new, but despite my single child status, I somehow connect to stories like this. I can feel Amy's frustration at not having her own life, her embarrassment about her sister, and her guilt about that embarrassment and frustration.

While I was a bit disheartened by the lack of explanation of Louann's brain-damage - she was just born that way - I did appreciate her growth as a being separate from her sister throughout the book. Amy wanted time away from Louann, but Louann almost needed it without knowing it. Her time away with an adult with a mentally challenged daughter (or niece, I can't remember right now) does a world of good for her. She is challenged to learn how to do things on her own, to try new experiences, in a way her family does not. It's not that her family doesn't love her and want her to be strong and independent; it's that their guilt and the habit of taking care of her prevent them from seeing her true potential. What's odd about everything I'm saying here is that I get all of this out of a subplot. I almost with there was more on all of this instead of on the murder-dollhouse-mystery.

Overall, this is a worthy read, and I and Madison enjoyed it during our middle-of-the-night feedings.

When I first read the author's name, I could not figure out where I had heard it before. A quick Google search solved my confusion though as Wright as also written: The Summer of Mrs. MacGregor, Christina's Ghost, Ghosts Beneath Our Feet, Haunted Summer, and Too Many Secrets, all books from my childhood which I still have on the shelves. No wonder I recognized the name.

This Book Around the Web :: Check out the Book Blogs Search Engine for more reviews


Question: Does anyone know of any middle grade books that deal with a situation like Amy and Louann's?

NOTES
This counts for my GOAL #1: Read Books I Own
Posted by Trisha at 5:28 AM