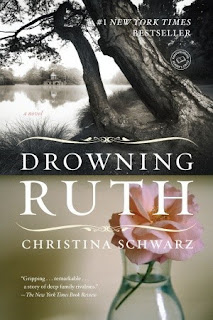 The Short and Sweet of It
The mysterious drowning of Mathilda Neumann drastically alters the lives of her daughter, sister, and husband as they try to cope with their loss...and their secrets.

A Bit of a Ramble
Flitting back and forth in time and between voices, Drowning Ruth's narrative structure is at once intriguing and annoying. The story is designed to slowly and carefully reveal the truth of what happened and the details of what is happening as each character gets a chance to talk only briefly, and at least one character is not exactly forthcoming about her life story. Also, the story moves in time with no clear indication of the chronological shift. While I enjoy this teasing method, I was occasionally frustrated, needing a second to determine the when of the events being narrated. I am not entirely sure if this frustration is due to a lack of skill in the writing, or just my overtired brain.

The story itself is rather tantalizing : the mysterious drowning, the unclear tragic events of one character's past, the mistaken ideas characters' have about the past, the possessive-to-the-point-of-obsession nature of the main character. The characters are psychologically interesting, but I was a bit disappointed that they didn't progress; all of them really end up in the same place they started mentally (and some of them really needed to grow).

I will say, however, that the psyche of the characters was more interesting to me than the mystery itself. The (arguable) main character, Amanda, displays an obsession with her niece, Ruth, that is disturbingly fascinating. Raising Ruth as her own after Mathilda's drowning, Amanda spends the next twenty-some-odd years building an umbilical cord between the two of them that not even a chainsaw could break. Carl, Mathilda's husband, and Ruth's quirks were just as fun to me, and these were the parts of the book I found most interesting.

If you are looking for a psychological thriller, it's a good read, but it ends up with only an Accept rating for me due to the overly complicated narrative structure and the lack of character growth.
Posted by Trisha at 3:57 PM