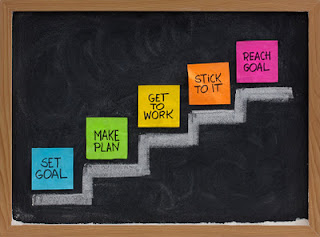 GOAL #1: Read Books I Own
This is the big one. I have 400+ books on my shelves that are wasting away, unread, and I think this is a good time to focus on those books.

Sub-Goal: Read at least 12 books from my new Classics Reading Project
I compiled a list of classics I either have on the shelves or on my nook, and I am determined to start reading my way through them.


UPDATE:  I've only read 6 of the classics on my list, and only 16 of the 48 books I've read were sitting on the shelves waiting to be read. Bad Trisha.


GOAL #2: Manage My Series
I am in the middle of a crap ton of young adult, adult, and graphic series. And to top it off, I also have the first books in another crap ton of series. I have 74 series to manage right now, already on the shelves. Post detailing my adult and graphic series, Post detailing my YAL series,
UPDATE: I worked really hard at the beginning of the year on Managing My Series. I put together spreadsheets, listing all of my series and every book in the series, detailing which I had read, which I owned, which I need to buy, and when new ones were to be released. I'm a bit behind on those spreadsheets as I know for a fact that I have purchased or received new series books and totally forgot to log them on the spreadsheet. When I find time, I'll have to re-update....when I find time. Yeah...


GOAL #3: Organize My Bookshelves
Self-explanatory. But I still haven't figured out exactly how I'm going to organize the shelves.

Sub-Goal: Organize my Nook
Self-explanatory again, but also again, I still haven't quite figured out how to organize them as I am not a huge fan of genre classifications. Perhaps something a bit more simple: Classics, Contemporary, YAL, and Nonfiction? And where do I draw the line between classics and contemporary?

Sub-Goal: Remove at least 300 books from my shelves (modified from original goal of 100)
I have roughly 2000 books in my house, and I really need to cull. Books may be donated to the library, traded through a swap site, or used for giveaways on the blog.

UPDATE: I am quite proud to say that so far I have given away exactly 200 books. Most recently I donated almost 60 books to a nearby women's prison. The prison has a library, but only the male inmates are allowed in; I think this is due to the location of the library. One of my colleagues at the college brought it up in a division meeting, saying that she was trying to get a library going for the women, and I was inspired. Granted, I probably could have gone a bit further than 60, but little bits at a time: culling my shelves is like cutting off tiny bits of me. I have no clue why I am obsessed with hoarding collecting books, but...I am. So...100 books to go....
Posted by Trisha at 5:00 AM