Book Review: The City and the City 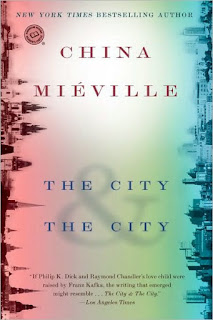 The Short and Sweet of It
"When a murdered woman is found in the city of Beszel, somewhere at the edge of Europe, it looks to be a routine case for Inspector Tyador Borlú of the Extreme Crime Squad. To investigate, Borlú must travel from the decaying Beszel to its equal, rival, and intimate neighbor, the vibrant city of Ul Qoma. But this is a border crossing like no other, a journey as psychic as it is physical, a seeing of the unseen. With Ul Qoman detective Qussim Dhatt, Borlú is enmeshed in a sordid underworld of nationalists intent on destroying their neighboring city, and unificationists who dream of dissolving the two into one. As the detectives uncover the dead woman’s secrets, they begin to suspect a truth that could cost them more than their lives. What stands against them are murderous powers in Beszel and in Ul Qoma: and, most terrifying of all, that which lies between these two cities."

A Bit of a Ramble
As I'm sure you noticed, I used the Amazon description of the book. This plain and simply because to summarize this book is a task I can't quite wrap my mind around. Technically this is what's happening: There are two distinct nations occupying the same geographical space - or rather partitioning out the same area so that the two countries are cross-hatched. For example, a park bench in a town square can be in one city and the tree next to the bench can be in the other. The two groups of people grow up learning how to "unsee" the other country and its inhabitants. Entering the other country, or even paying attention to it can get you in big big trouble. Like disappearing kind of trouble.

Wrapping my mind around this setting was not easy for me. I found it very unbelievable at first. How can you not see something that is right in front of you? The concept is psychologically fascinating, and over time - and with a great deal of thought - I found myself not only believing it possible, but also seeing less dramatic parallels in our own society. How many Chicagoans don't see the homeless people that populate the streets? How many people walk by and completely ignore certain buildings in their own hometowns? I guarantee there are buildings in my town which I could in no way describe for you. This is an intriguing reflection on ideology, and on the permission given by ordinary citizens for certain cultural norms to exist.

From the beginning, I was hooked. Very rarely do I read a book in which the setting is so tantamount to the story, and when done well this addition of setting as character captures me and lends an air of realness or permanence. The story is, at its core, a crime mystery, but damned if that wasn't really overshadowed for me by the setting. The language is direct, sparse, an interesting and necessary(?) contrast to the complexity of the setting. I will definitely be reading more Mieville.
Posted by Trisha at 5:00 AM