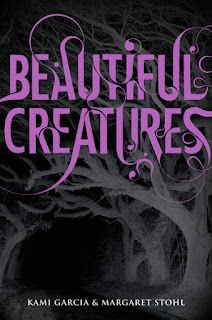 While on vacation in Ft. Myer's Beach (more on that later) I read the first books in two series. The first, Beautiful Creatures, I have had on my shelves since BEA 2010, but kept bypassing for some other book. Finally, I figured I'd better read it before I go and see the movie, right? So what do I do? I purchase the damn thing on my nook. Hey, I didn't want to lug that giant book with me on the plane..and I had a gift card....okay so it was a spendy sort of move....

Anyway, for the maybe two of you out there who haven't read this yet, Beautiful Creatures is a young adult paranormal romance novel about Ethan, a small town boy with dreams of a bigger life, and Lena, a magical girl dreading her 16th birthday. Only one week after reading this novel, all I can really remember are two things: 1) small town idiocy and bigotry and 2) when normal humans and paranormal humans mate, the normal humans may die (this is oddly prevalent in YAL; it's like we aren't sure if we want to be kissed or killed...or maybe both as long as it is intense and passionate). Anywhos, my big problem with the book was the lack of action - I am still trying to figure out what's going to happen in the film. The majority of the book feels like a focus on the narrow-mindedness of small towns. The bulk of the action in the book revolved around high school kids being mean to Lena, the outsider. At least, that's what it felt like to me.

That is not to say I didn't enjoy the book; it just didn't live up to my expectations. While I have the next two installments of the series on my shelves, I'm going to hold off on reading them. 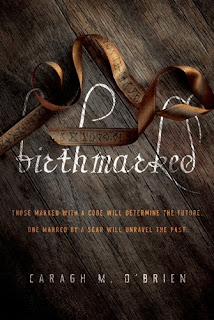 Birthmarked, on the other hand, knocked me out of the water. I loved it. A dystopian novel, Birthmarked reveals a society in which the population is divided into two groups - inside and outside the wall. Those inside are privileged, those out, not so much (the reason behind this is fascinating to me). The story starts with a bang as our protagonist, Gaia, delivers a baby and promptly hands it over to the Enclave. The first three babies she delivers every month have to be turned over for adoption to those inside the wall. Holy crap, right?

The world building is exceptional, the characters are unique and fascinating, and the action is non-stop. And to top off my happiness, there is no love triangle, the two main characters do not fall hopelessly and passionately in love at first sight, and real tragedy and loss are dealt with without sugar-coating. Yippee! I cannot wait to read the rest of this series which I promptly bought on my nook approximately 20 seconds after finishing the book. Unfortunately, I forgot to download the freaking books to my iPad, and hence, was unable to start reading on the plane as I would not pay for Wi-Fi. Idiot me. 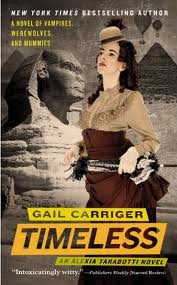 On a different note, I also managed to read Timeless on vacation, the fifth book in the Parasol Protectorate series, and as with all of those books - adore. Alexia, the protagonist, is one of my favorite people ever...I mean character, favorite character, I know she's not a real person - and I have a strong desire to live in the world Gail Carriger has created.

Now then, off to scrap together some more time for reading and blogging.
Posted by Trisha at 4:00 AM