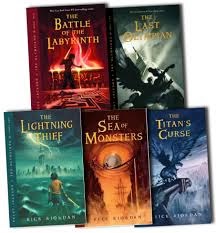 I crush on this series pretty hard. I have read the series many times, and I am sure I will read it many more. For more detailed reviews of individual books, check out my original reviews: The Lightning Thief, The Sea of Monsters, The Titan's Curse, The Battle of the Labyrinth, and The Last Olympian.

A quick overview of the series as whole: Percy Jackson is not your normal boy; he is the son of a god, Poseidon to be exact, and his half-blood status not only gets him in with a secret community of kids like him, it also gets him embroiled in an epic conflict between the Greek Gods and the Titans, the conflict which drives the entire series. Along with his best friend Grover, a satyr, and his romantic interest Annabeth, daughter of Athena, Percy must battle monsters, live up to legends, and in general become myth.

The action is non-stop in the series with battles and capers and travels. Something is always happening, but never do I feel like something is happening just to have something happen. All of the plot lines, plot points, and plot details seem orchestrated to create a unified whole. When X happens, it is because it must happen for Y to occur; rather than some reads where X happens because of shock value or some appeal to emotion or the such not.

Percy, Annabeth, and Grover are believable, round, dynamic characters, and more importantly, our group of friends is joined by a solid cast of "supporting" characters who are also believable, round, and dynamic. I just love it when their are complex people in a book instead of one (or two) foregrounded characters and a bunch of flat stereotypes populating the background.

My love of this series led me to read the spin-off series The Heroes of Olympus: 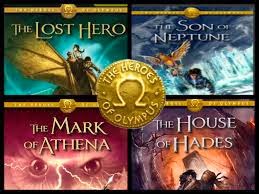 The Heroes of Olympus sticks with Percy et. al. but adds a twist and a whole new cast of characters. Camp Half-Blood, Percy's Greek homebase, has a sister camp, Camp Jupiter, where the children are the sons and daughters of the Roman gods - in essence, the dual personality of the Greek gods where Zeus becomes Jupiter, Poseidon becomes Neptune, and so on and so forth.

Now, of course, the Roman gods were no more celibate (or you know, faithful to their spouses) than the Greek gods, so we have a whole new world of half-bloods. The read is chock full of wonderful details - like Wind Gods who do the Weather but have to keep revising because of various gods' conflicting requests - and both the central conflict and the continuous action kept me involved in the story.

I, however, did not love this series as much as the original primarily because we have 7 - that's SEVEN - main characters: Percy, Annabeth, Jason, Piper, Leo, Hazel, and Frank. While Riordan does a decent job of developing the characters and making me care about them, there was just too much going on with too many people for me to develop any sort of lasting love.

I'm glad I read the series, but I won't be re-reading it as I do with the original.