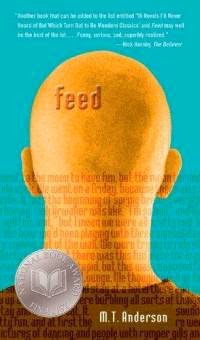 I can't remember where I first heard about M.T. Anderson's Feed; it was quite a while ago, it was on a blog, and the review was positive and intrigued me enough to add it to the wishlist. Now if I was a nicely organized blogger, I would have added the link or at least the blog name where I read about this one, but alas, I am not that on top of things - or at least I wasn't at the point in time.

The plot of this novel revolves around consumerism - specifically media manipulated culture creation. Every person in America has their brain wired in to the "feed." They are constantly bombarded with advertising specific to their preferences; they can chat each other mentally; pretty much everything we can do on a computer they can do in their heads.

On a party trip to the moon, the protagonist, Titus, meets a girl who will change his life, Violet, a latecomer to the wired-in world who can't fully commit to the experience. Titus and Violet, along with other friends of Titus's, are hacked and left, brains empty, for days before the feed can be fixed. Once rewired, Titus and Violet begin a romance continuously marred by Violet's resistance to the feed, its pervasive selling and its control over humanity.

Clearly allegorical of the world we live in, Feed does a decent job of calling attention to the weakness of humanity in the face of media manipulation, and our ability to ignore clear and present dangers due to media distraction and deception. In other words, thematically the book rocks. And I really enjoyed the way Anderson used language to reveal large scale personality shifts and intellectual loss to the American people. The diction, vocabulary, syntax, sentence structure, etc. are made obviously simplistic to mimic the loss of intelligence. Characters speak in questions rather than declarative statements to suggest the loss of confidence in thought. It was quite nicely done.

In the end though, the book could just not quite grab me, and I ended up feeling rather indifferent to the story. Not enough happens, no character really changes, and the ending was remarkably flat for me. So, while artfully constructed and thematically significant, Feed ended up being just okay for me due to a lack of interest in the plot and relation to the characters.
Posted by Trisha at 4:00 AM