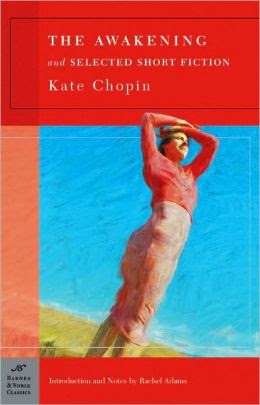 Four years ago, I read The Awakening by Kate Chopin which was part of a collection of hers which included a bunch of short stories. At the time I only read The Awakening, and, to be honest, I was not overly impressed. The novel is clearly a revolutionary insight into the culturally unacceptable dissatisfaction of many women; and yet I was so disappointed in the ending it colored the rest of the novel for me. So much so, that I refrained from reading the other short stories in the collection.

Finally I have read it, and I must say that overall, I am rather impressed. Instead of reviewing the collection as a whole I am going to discuss a few stories at a time. I have no ability to discuss short stories without plot spoilers, so consider yourself warned.

First up is Desiree's Baby (read it online). I decided to read this one because I remember a colleague recommending it for my Intro to Lit course awhile ago. I didn't end up using it - or even reading it - instead settling for another Chopin story I had already read, The Story of an Hour (more on this one later). In Desiree's Baby, our titular character - and I mean the baby, not Desiree - is a joy to her parents, a naive and in love Desiree and a rather unlikeable asshat of a father Armand. Then the twist. Armand, whose cruel demeanor changed with the birth of his son, suddenly returns to his slave-beating, sullen, distant ways, and some time later, Desiree discovers the source of his displeasure: his baby boy is part black. Obvious to Armand, this means that Desiree must be the result of a mixed-race relationship, and Desiree, adopted and unsure of her parents, disappears with the child into the swamp. Then a bigger twist. Armand finds a note from his mother revealing that it is he who is the son of a slave woman.

There's the story in a nutshell; although I must warn you that knowing what happened is nowhere near as important as the way the story is told. Chopin really does have a way with the words people. My only issue with the story - or at least the issue that sticks out most is the final twist. The "shock" here is that Armand was mistaken in thinking Desiree was of mixed race: almost as if the action in the story would have been perfectly acceptable otherwise. It's like the story is suggesting that if Armand was wronged by the "impure blood" of his wife, then her death, or at least disappearance, and that of the child is somehow understandable. I may be reading too much into this, but it did bug me. And at the least, this certainly does offer up some serious points for discussion.

This is the type of story where by the middle you know what is going to happen, but you are somehow still shocked at the end. Simply exploring issues of both gender and race, Desiree's Baby is a wee bit cliched yet still evocative, and I highly recommend reading it.

I would love to hear your thoughts on this story!
Posted by Trisha at 12:30 PM