So Anna over at things mean a lot wrote a post mentioning the awesomeness that is Veronica Mars, and then Kim at Sophisticated Dorkiness mentioned the show, and since she had gushed over Friday Night Lights - a show I devoured on Netflix - I figured she knew what she was talking about when it came to tv shows. Then I fortuitously got sick and was able to watch the entire first season of Veronica Mars on Amazon Prime (I say fortuitously because being sick meant my mom let Madinut spend the night and day with her and I got to binge on tv). I loved it - despite the sickness, and over the next few weeks, I finished the series, watched the movie, and read the book. 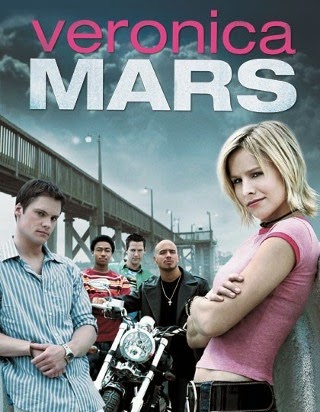 The tv show follows Veronica as she investigates various cases for her classmates (episode conflicts) while simultaneously investigating the murder of her best friend, Lilly Kane (series conflict for first two seasons). Originally a social outcast in school due to her family's loss of status after her father placed blame on Lilly's father, Veronica slowly eases her way back in to the social sphere through her investigations for her classmates. Friendships and romances blossom - and except for one sub-plot involving child abuse, unwanted pregnancy, and a not-quite-kidnapping - I loved the story so much it hurt. This sub-plot reminded me of the Tyra-rape sub-plot in Friday Night Lights; it was an aberration that seemed sensational rather than substantive and was my one big disappointment with the show. Still, unlike Friday Night Lights (and Glee and many, many other teen-based tv shows), my admiration for Veronica Mars even survived high school graduation. I liked this show until the bitter end.

The movie picks up a few years after the show fell off. Veronica returns to her hometown to help an old friend and easily falls back into her role as private investigator. Logan, Veronica's high school ex, is the prime suspect in the murder of his pop-star girlfriend Bonnie, and Veronica must find the real killer fast. Many of the characters from the tv show joined the cast, and in an interesting twist, they were the victims and the suspects in this murder-mystery rather than just side characters. What also interested me were the changes - and lack thereof - the characters underwent over the years. Sometimes changes to a character's personality distance me, but in this instance, the changes were so appropriate to that particular character's growing up that it all felt very natural, organic. The ending was also highly satisfying, nicely wrapping things up while simultaneously leaving the door open for more.

And then comes the book. Picking up exactly where the movie ended, The Thousand Dollar Tan Lan has Veronica running Mars Investigations while her father recuperates. When a young Spring Breaker goes missing, Veronica is called in to a dangerous investigation with mafia-type criminals and secrets from her past. While still just as witty and quirky as the tv series, my only complaint was wanting more of the regular characters. It was very strange to have an MIA Logan for a Veronica Mars story. Veronica, as a character, still gets my independent heart all aflutter. I love that she's choosing what she loves for her career instead of what would please her father, make her money, etc.

I'm keeping my fingers crossed that more books and more movies are coming as I am most definitely not ready for this world to end.
Posted by Trisha at 5:00 AM