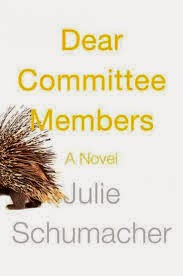 Forget teen angst. This is professorial angst. I love it, and I have to thank April from The Steadfast Reader for recommending this wonderful book.

An epistolary novel, Dear Committee Members is a series of letters of recommendation (LORs) for students, colleagues, and friends written by Jay Fitger, Professor of English at Payne University. Fitger's letters are creative, sarcastic, hilarious and so remarkably true. Interspersing personal and professional commentary into his LORs - sometimes because he knows so little about the student, sometimes because of the LORs audience - Fitger snarkily reveals the demeaned state of his department and his life. He is a wee bit misanthropic, but justifiably and humorously so.

So much in this novel rings true for me. As a composition, literature, and film professor in a college primarily focused on Nursing and Technology, I feel Fitger's pain as he bemoans the fact that his colleagues in the Economics department are being treated to lavish and swanky new offices while the English professors live in a toxic environment with wires, falling ceilings, and asbestos warning signs. At my college, I am in an office with windows that do not just leak, but actively pour, with carpeting that covers quantities of mold which may kill me. The Nursing and Tech faculty have large, new, clean well furnished offices...with views.

I thought about including some snippets from the letters, or even a letter in its entirety, but then I couldn't decide which to use and I didn't want to ruin the discovery of all this funny.

I am not sure how this book will read for someone less similar to Fitger and his situation as I can't separate myself from the world in the book. This book was personal to me, spoke to so many issues I think about daily, and did so rather perfectly. I'm pretty sure I've found the Christmas present for all of my other beleaguered, undervalued, struggling English professors in my department.
Posted by Trisha at 4:00 AM