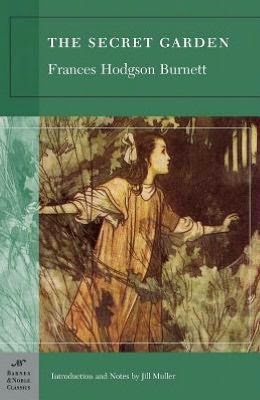 I picked up Frances Hodgson Burnett's The Secret Garden for three reasons:

For those of you who have never read this, it is the story of a young orphan girl, Mary, who becomes a ward of her absent, morose uncle. After hearing a story about her aunt's demise in a since locked up garden, Mary sets out to find the garden and succeeds. Keeping it a secret from most of the adults, she invites in a local boy, Dickon, and her sickly, spoiled cousin Colin into her garden and the three kids find the magic of nature and friendship can be healing.

The story is remarkably simple and sweet. While part of me wishes the story was more fleshed out, I appreciate the easiness of the story as it is told. Basically the story shows Mary's growth from a sickly, spoiled brat into a young girl who can teach another sickly, spoiled brat how to be better. And apparently this rather dramatic change is accomplished by nothing more than being outside and the influence of a friend from the lower class. I may be oversimplifying a bit here, or even sounding condescending, but as I said this is a remarkably simple story.

The personality changes - the kids' and the adult's - may be a bit unbelievable, but there is something sweet and innocent about these transitions, and it is fitting considering the intended audience for the book - NOT a mildly cynical woman in her 30s.

What I find most interesting in this book is the issue of class. Both Mary and Colin are the children of absent, well-off parents. They are left in the charge of servants who give the children anything they want and put up with their tantrums and fits and that horrid tone of voice a spoiled kid can get that makes you re-think your no-spanking-children stance...okay, that last part may be invented by yours truly, but I think it can be reasonably inferred from the details in the story. Not only does this bring up many, many complications arising from positions of power in what is, in essence, parent-child relationships between servants and masters, the story also has a brother of a servant as the model for the ideal child. A Marxist theorist could go crazy with this story.

While I wouldn't urge you to run out and buy this, if you do come across it, it's worth the very short time it takes to read.