Medieval Monday: Description of the Wife of Bath

Geoffrey Chaucer's The Canterbury Tales is one of the most studied books of all time in my experience. I seriously have looked at bits and pieces of this text over and over again throughout my education and my career. This time I read it in very time bites and analyzed it piecemeal.

First up, the description of the Wife of Bath in the General Prologue. I really enjoyed this description. A deaf, gap-toothed, red-stocking-wearing woman, the Wife of Bath sews like a pro, rides well, talks easily, and travels widely. Most importantly, she is well known for her love of men. She has been married five times, and that’s not including the men she’d gone with when she was younger. These experiences made her quite knowledgeable about “remedies of love” (477).

The whole description of the Wife suggests sex. The red stockings and red face, the many men she married or kept company with, even her gap-toothed grin. Apparently, this physicality was “thought to be a sign of amorousness” (Greenblatt 254).  Hilariously – and horrifyingly – “a gap-toothed devout virgin had to fill the space cosmetically, or refrain from smiling” (Cosman 476). That. Is. Hilarious. 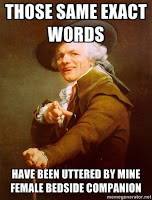 Even the juxtaposition of certain phrases were designed to indicate a sensual nature and a wealth of experience. Take the following two lines for example: “She coude muchel of wandring by the waye: / Gat-toothed was she, soothly for to saye” (469-470). On initial reading, the first line seems to simple say that the Wife was a skilled traveler; but coupling it with the following line which is suggestive of sensuality, the line could be reinterpreted. Perhaps the Wife was skilled at wandering from man to man or was adventurous romantically or sexually.  This subtle suggestion is reinforced when the speaker says “she coude of that art the olde daunce” (478), again indicating the Wife is highly experienced in the ways of the flesh. Phrases like this today would have a “hint, hint” or a “wink, wink” to go along with them. Or maybe a more amusing ‘that’s what she said’.

This focus on sexuality carries over into the very naming of the Wife. While the other pilgrims are named by profession – Miller, Franklin, Cook, etc. – the Wife is not called Seamstress. Barbara Daniels argues that this change in the naming system “makes her more personalized”, but I argue that this also highlights the importance of sexuality to the character. Even though her trade is in sewing, her true profession is Wife.

I remember the first time I read this back in high school. I was surprised by how bawdy it all was, and I wasn’t even catching half of the suggestions or double entendres. Was/Is anyone else surprised by this? Do you see any other indications of sexuality in this passage? What do you think Chaucer meant, specifically, by the phrase “remedies of love” (477)?

Daniels, Barbara. “The Wife of Bath: Her Description from the General Prologue to the Canterbury Tales.” Classics of English Literature. Web. 17 June 2015.