Medieval Monday: The Role of Drinking in Beowulf 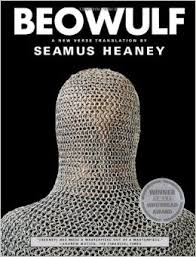 “Drunk and Pledged”: The Role of Alcohol in Beowulf

Matt Groening calls alcohol “the cause of…and the solution to…all of life’s problems” (“Quotes”). The Middle Ages, it seems, would agree. Drinking was clearly an important part of life; after all the primary place of gathering was called the “mead”-hall. Most of the important events then (and now) were celebrated with alcohol. Within Beowulf, alcohol has two primary effects: to cultivate community and to boost confidence. Both of these fulfill the larger purpose of engendering courage in the warriors.

Drinking held ritual significance in the Middle Ages, functioning as a way to celebrate individual and communal victories as well as foster a strong sense of community. One particular ritual, symbel, well illustrates this point. During symbel, “a celebrant would drink ale or mead from a drinking horn” presented by the lady of the house (Black 75, Wills). This takes place in Beowulf at both Heorot and Hygelac’s hall. At Heorot, Queen Wealhtheow presides over the ritual:


“Adorned in her gold, she graciously saluted the men in the hall, then handed the cup first to Hrothgar, their homeland’s guardian, urging him to drink deep and enjoy it because he was dear to them. And he drank it down like the warlord he was, with festive cheer. (614-619)

After serving Hrothgar, Queen Wealhtheow offers the cup to the warriors according to rank, culminating with Beowulf, one of the lowest ranks at this point as he has not yet proven himself:


So the Helming woman went on her rounds, queenly and dignified, decked out in rings, offering the goblet to all ranks, treating the household and the assembled troop, until it was Beowulf’s turn to take it from her hand. (620-624)

As readers find out later in the poem, Freawaru, King Hrothgar and Queen Wealhtheow’s daughter, also performs this ritual: “Sometimes Hrothgar’s daughter distributed / ale to older ranks, in order on the benches” (2020-2021). In Hygelac’s hall, “Haereth’s daughter / moved about with the mead-jug in her hand, / taking care of the company, filling the cups / that warriors held out” (1980-1983). The continual reference to symbel reveals its importance to Anglo-Saxon culture, and as Black identifies, making drinking a ritual ensures the drinker becomes an active, integrated member of that culture (77).

Communal drinking equals social attachment, and not only does “sharing in ritual activity result in increased social bonding, [it also] emphasiz[es] the validity of the group” (Black 77). Reminiscent of the Catholic ritual of the Eucharist which includes the entire congregation drinking wine from a shared cup, this sort of ritualized drinking ceremony bound the warriors to each other and to the house the cup-bearer represented.

Even without the ritualized aspects, group drinking is a bonding activity. Beowulf describes Heorot hall as “a happy gathering. In my whole life / I have never seen mead enjoyed more / in any hall on earth” (2014-2016). Later when describing Heorot, Beowulf states that “Inside Heorot / there was nothing but friendship” (1016-1017) after the men “fell to with relish; [and] round upon round / of mead was passed” (1013-1014). While it could be argued that the friendship would exist without the alcohol, “alcohol serves as a bonding agent…lubricating social interaction and creating commonality” (Black 131). Through the ritualization of drinking and the shared enjoyment of drinking, beer in Beowulf certainly helps build a sense of community.

But that is not the only role beer plays in this epic poem. The effect of alcohol on confidence has been well documented anecdotally. A few cups in, one feels the beginning rush of confidence which, a few cups later, becomes arrogance. This is particularly evident in Beowulf with the character Unferth, who seems to become quite boastful while drinking. After Unferth insults Beowulf, Beowulf replies: “Well, friend Unferth, you have had your say / about Breca and me. But it was mostly beer / that was doing the talking” (530-531). Clearly, Beowulf believes that drinking has loosened Unferth’s tongue and provided him with the confidence needed to speak his mind, if a bit foolishly.

Unferth’s propensity to talk foolishly while drinking is mirrored by others in Beowulf. During Beowulf’s digression regarding Ingeld, Beowulf posits that “an old spearman will speak while they are drinking…[and] stir up trouble” (2041-2046). Here Beowulf is saying that under the influence of alcohol some of the warriors may gain the, possibly misplaced, confidence to say what should be kept silent. Again, the use of alcohol provides the “liquid courage” needed for a warrior to speak his mind without filters.

This “liquid courage” inspired more than insults and trash talk though. Drinking also inspired warriors to fight for their lord. Reading Beowulf reveals the link between drinking and oaths of loyalty. As Beowulf states, “I remember that time when mead was flowing, / how we pledged loyalty to our lord in the hall” (2633-2634). This connection is referenced earlier as well when it is stated that “the thanes…having drunk and pledged…do as I bid” (1230-1231). Swearing oaths of loyalty while drinking makes sense in a culture which not only ritualized drinking, but also made it a central part of life. 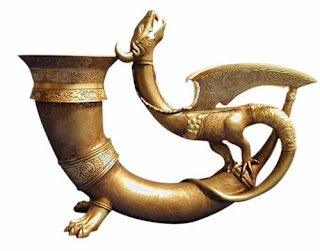 Combine these oaths of loyalty with an increase in confidence and a strongly instilled sense of community, and what results is a group of warriors feeling invincible and ready for action. In Heorot, the men drink in preparation for a night battling Grendel: “Time and again, when the goblets passed and seasoned fighters got flushed with beer they would pledge themselves to protect Heorot and wait for Grendel with their whetted swords. (484-487) These men, brave with alcohol would be dead by morning (491). This sort of stress certainly weighs on a person. Knowing what was coming, the men needed something not only to motivate them to fight, but also to keep them from fleeing in the first place. Their lives were hard, their fights dangerous, and alcohol may have made all of that a bit easier to face.

By increasing their confidence and binding them together as a community, alcohol served to embolden warriors, inspiring them to courageous acts. Now, centuries later, alcohol still fulfills many of the same purposes, although maybe on a lesser scale. Instead of mead-halls, we congregate in bars, but drinking still engenders a feeling of community. Instead of inducing the confidence and bravery to fight a monster, we get the courage to talk to someone new. We celebrate with alcohol and make our oaths under the influence, and alcohol is still “the cause of…and the solution to…all of life’s problems” (“Quotes”).