Book Review: The Chosen One : Giveaway 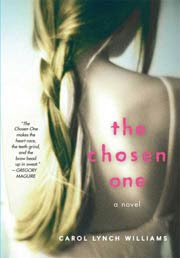 The Chosen One is based on a true story: Kyra's life is about to change. God has spoken to the Prophet and dictated that she must marry her sixty-year-old uncle, an abhorrent prospect for Kyra on many levels.

First, I want to thank Elizabeth at As Usual I Need More Bookshelves for sending me this book as part of the BBAW Giveaways. The Chosen One was a wonderfully quick read. I picked it up around 9pm and was finished and in bed by 10:45. It was hard to sleep though, but more on that later.

The fast-paced plot doesn't dwell on unnecessary details or wax poetic on morality, but instead presents one girl's life clearly and concretely. The deeper philosophies are identifiable and intrigue through their simple presentation. The horror of living under the tyrannical power of "The Prophet", of having your entire life planned out for you and controlled, reveals itself to the readers through concrete action.

Kyra's personality is revealed in similar anecdotes. She questions her community, her life, and even goes so far as to outright defy conventions. She reads books, thinks of killing The Prophet, wishes for outside help for her mother, secretly meets with a boy; all things she is not only forbidden from doing, but if caught, her punishment could be as severe as death.

I should not read books about polygamists, Fundamentalists, child abusers, or gated communities. Nightmares on the page, that is what these books are for me. I see Kyra's parents defy their own logic and emotion, and for what? They are unhappy with their life, disbelieving in The Prophet, and yet they are willing to abuse their children, physically punish them, give them as wives to men 50+ years older? These people should be quickly caught and executed. It is that strong emotion which tells me I should probably stop reading such books. After finishing one, I am horrified, disgusted, and almost violently angry; and it is a feeling I can't shake for days.

I had the same negative reaction when reading Carolyn Jessop's Escape, the true story of one woman fleeing from a fundamentalist Foundation for Latter Day Saints' compound. As I said in that review, "I can not possibly understand a faith which allows for spousal and child abuse, a faith which elevates the man/husband to a position of such power that even those who disagree with the way he "runs" his family will not step in and help because they still believe it is his right. I also found myself annoyed that as a country, we allow a community to violate our laws and commit oppressive and abusive acts. People say this country was founded on the concept of religious freedom, but I would like to think that personal freedom is the real foundation. And when religion calls for the subjugation of the individual, personal freedom must trump religion. We will use the civil rights violations occurring in the Middle East to encite support for a war, but we won't deal with those same civil rights violations within our own boundaries. Seems...illogical and self-destructive."

Memorable Scene: Mariah, 8 months old, cried when the Prophet and some respected Brothers visited Kyra's family. Later, Kyra's uncle comes over and forces the family to punish Mariah. The mother has to submerge Mariah in water until the Brother says she can raise the baby up. Twice. After he leaves, it is a quick race to get Mariah to breathe again. The mother doesn't want to do this; the father doesn't want it done; Kyra is screaming to stop; and yet they give in to the power of their "religion".

Memorable Quote: We are here for the men...It's as though someone punches me in the throat.

Question: Are there any topics that evoke such powerful negative emotions in you that you almost don't want to read about them?

Other Reviews
If I've missed yours, let me know

Interview with the Author
If I've missed yours, let me know


If you are interested in receiving a copy of this book, leave your email address in the comments. Get an extra entry if you are a follower of my blog!
Posted by Trisha at 7:15 AM