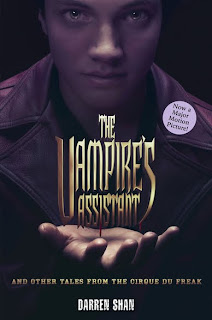 While the cover has The Vampire's Assistant as the title, this book is actually a collection of the first three installments in the Cirque du Freak series: A Living Nightmare, The Vampire's Assistant, and Tunnels of Blood. These three stories take us through young Darren's initiation into a world he didn't believe existed.

After finding an advertisement for a freak show, Darren and his best friend Steve enter an old theatre and watch the parade of freaks. But at the Cirque du Freak, the Bearded Lady is more than a woman with glue on her face and the Wolf Man is more wolf than man. The real attraction for both boys, however, is the vampire, Crepsley, and his spider, Madame Octa. Darren desires the trained spider, but Steve's desire is more focused on the vampire. Their desires get them both into a spot of trouble, and in the end these two best friends must part...and not quite amicably. And so ends A Living Nightmare.

The Vampire's Assistant picks up as Darren, forced to leave his comfortable life, begins his life as Mr. Crepsley's assistant. The two are traveling but circumstances, and Darren's loneliness, convince Mr. Crepsley that a return to the Cirque du Freak is in order. There, among a man who can sprint on his hands, another who can lose and regrow limbs, and the mysterious Mr. Tall, Darren finds a place for himself, and a friend in Ezra, the Snake Boy. Ezra and Darren also befriend a boy from town named Sam and an environmental nut, but these two characters cause a few problems among the freakshow.

In the final book, Tunnels of Blood, Mr. Crepsley takes Darren and Ezra to his home town to fight a subdivision of the vampire community called vampaneze. Unfortunately, Mr. Crepsley is rather secretive about his mission, so the young boys are unsure if Crepsley is the good guy or the bad guy this time around. To make matters more complicated, Darren is rather smitten with a young girl who lives across the road from his hotel.

You should read this. All three of these books kept my attention, and not just for short spurts of reading. I read all 692 pages during the readathon and honestly, when I finished, I wished I had the rest of the series on hand. Keep in mind that I finished the last page around 6am after reading for 23 hours prior.

Darren Shan intrigues me as a character, in part because he is the author and this is a true story. I love it when books are set up this way; it's just such a fun little extra. In the world of the book, I still love the character. He's in an untenable situation and his adaptation to this new world is strikingly realistic - emotional but not overly dramatic; afterall, he's a young boy. They aren't exactly drama queens. I will say that *minor spoiler* when he steals Madame Octa and then doesn't tell the truth about what happened to Steve despite the life or death circumstances, I was a bit off-put. Those are some pretty big no-nos for the hero. But he does redeem himself throughout the next two novels.

This is getting long, but I am discussing three books! Just one more thing...The Cirque du Freak has some weird hooded characters that never show their faces and eat meat...like people meat from time to time. I can't wait to find out more about these oddities which are ruled by the only true mark of evil in the books (so far). Okay I'll stop now.

Memorable Scene: At the end of A Living Nightmare, Steve, feeling betrayed, attacks the not-so-much-dead Darren. This loss of friendship was oddly poignant for me. Typically in these situations, there is a distinct good guy and bad guy. For me, both boys had shown their faults and their strengths before this point, so while Darren is clearly the protagonist, you still feel for Steve, an unhappy young boy who feels his best friend has stolen the life he was meant to live. Then again, his violent reaction is unwarranted and the reader empathizes with Darren's pain as the friend he sacrificed so much for actually vows to kill him. It was a scene that really stuck with me - one of many.

Memorable Quote: Imagine: a real-life vampire! I used to believe they were real but then my parents and teachers convinced me they weren't. So much for the wisdom of grown-ups!

Question: Are you guys reading or re-reading this before watching the film? If you plan on watching it at all that is.

Other Reviews
If you've reviewed this book (or any one of them), let me know. I found a bunch of giveaways but no reviews when I did a quick search.
Posted by Trisha at 8:21 AM