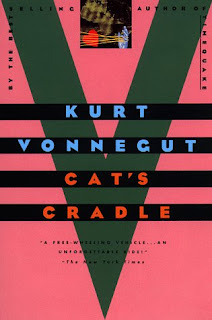 Plot Synopsis
The narrator, "Jonah", sets out to research the everyday lives of people on the day the bomb dropped on Hiroshima, but finds his life woven into a complex and absurd narrative.

My Thoughts
The two Vonnegut books I've read have both struck me as primarily anti-war texts and manifestos to man's stupidity.  I approve wholeheartedly.  I feel man's stupidity is most nicely bound up in the concept of granfalloon, a Bokononist concept where people believe they have a connection with others that does not in fact actually exist.  Religion, Nationality, Race, Clubs and Organizations, these are all false connections.  We choose to identify with particular people based on associations that are inherently meaningless, and sometimes we protect this absurd relationship in violent and stupid ways.  The philosophy of Bokononism is sprinkled liberally throughout the text and is, for me, the force driving the story; without it, the story loses its essence.

Vonnegut's writing is so much like speech, his chapters so short, and his themes so intriguing that reading his books is an almost frantic activity for me.  I move through them quickly but don't lose comprehension.  I enjoy the quick movement, the short fast-paced sentence and chapter structure.

There is so much more to say about this book, but as always I believe that discovering the story on your own is the best bet.

Memorable Scene:  Angela bundling up her two brothers and her father before they went out into the cold is a scene that affected me.  Her father is useless as a parent and when her mother dies, Angela, only a teenager, has to take on responsibility for the family, giving up her life for them.  This image of a young girl playing the role of mother in one of its most cliched forms - protection and caring before leaving the safety of the home - was especially poignant for me.

Memorable Quotes:  Americans are forever searching for love in forms it never takes, in places it can never be.


What hope can there be for mankind...when there are such men...to give such playthings...to such short-sighted children as almost all men and women are?

Padfoot and Prongs; A Striped Armchair;