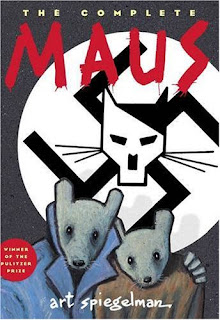 Plot Synopsis
In Maus, Art Spiegelman graphically reveals the story of his father's time during World War II as well as the time his father spent telling him this story.

Maus is a powerful book.  Spiegelman simultaneously discusses the art and pain of surviving the Holocaust, the difficult relationships between fathers and sons, and the confusion of a situation not experienced but still vital to a person's life.

On the one hand, I love this book.  I find the story moving, the artwork imaginative, and the themes intriguing.  On the other hand, I do not love this book as much as it seems others do.  This is not the quintessential Holocaust story for me.  Elie Wiesel's Night, David Faber's Because of Romek, Wesley Adamcyk's When God Looked the Other Way, these stories are just as, if not more, powerful for me.

I think what does set this apart is - obviously - the form the story took.  A holocaust story that is a graphic novel, complete with humans depicted as animals, is an entirely unique and daring concept.  And it worked.  Jews are portrayed as mice, Polish are pigs, Nazis are cats, Americans are dogs, Frenchmen are frogs, Swedes are reindeer, and so on, and yet I never felt that these portrayals were diminishing the ethnicity of the individual or the similarities between all humans.

Another major difference between Spiegelman's book and the other Holocaust stories I've read is the focus.  Maus is not focused solely on One Man's Story of the Holocaust.  The real focus seems to be the relationship between Art and his father, Vladek.  I would hazard a guess that at least a third of the book deals with the present instead of the past (WWII).  We see Vladek as an old man, narrating his story to his son, bickering with his wife; we see the tension between Art and Vladek, the flaws of a man who survived so much; we see the struggle Art had emotionally with writing this story.

These separate focuses..foci..are what I was not completely in love with.  I appreciate the honesty with which Art portrayed his father, showing his frugality, racism, and bitterness. I enjoyed the inclusion of an entire separate comic devoted to his mother's suicide.  I even found the section on  Art's success with the original Maus interesting.  But it was all this extra that makes me feel like this is not as powerful of a Holocaust story as the others I mentioned.  Maus is something different.

So my final thoughts...read it.

Memorable Scene: Vladek and Anja sent their son Richieu to live with his aunt Tosha in order to protect him.  When it seemed like Tosha and the children were to be sent to Auschwitz, Tosha poisoned herself, her daughter Bibi and her niece and nephew, Lonia and Richieu, to save them from a worse death. I have heard many stories like this, of an adult killing children to save them from the Nazis, and I can never decide if this is horrible cowardice or amazing mercy.

Memorable Quote: But here God didn't come.  We were all on our own.

things mean a lot; In Spring it is the Dawn; Rebecca Reads; books i done read; Books of Mee; Trish's Reading Nook; The Zen Leaf;  Bibliofreakblog;

Question:  Do you think the popularity of this book is due in large part to the originality of form?