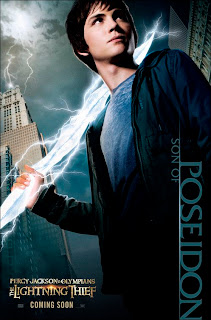 Plot Synopsis
Percy Jackson has been in and out of six schools in six years.  Diagnosed with ADHD and dyslexia, he just seems not made for the normal world.  As it turns out, he's not.  He's the son of a Greek God, who along with all the other Greek gods, is alive and well on Olympus.  When an item is stolen from Zeus, Poseidon is blamed, and Percy is sent on a quest to prevent a catastrophic war among the gods.

The Book
I love this story.  This is my second time reading it, and I still get a kick out of all the wonderful events in the book.  The plot line mirrors that of other hero stories: a quest with mini-challenges along the way, a bit of a twist to the actual conflict, a reluctant hero, and helpful friends.

In The Lightning Thief the action never stops.  Percy and friends Annabeth and Grover are constantly moving, constantly meeting a new challenge, making this book the type to read in as few sittings as possible.  I managed it in just two sittings this time around. Despite the fast-paced action, the book still has a lot to offer in the way of depth.  The reasoning behind what is happening, the history behind the monsters and the gods, this keeps me turning the page just as much as the excitement.

The Movie
That depth is what is missing from the film.  Kronos, Luke, and Ares are either completely absent or so modified as to be unrecognizable.  This change to the story bothered me even though I know it was made to keep the film as a stand alone and be understandable to those who had not read the book.  Other changes annoyed me but weren't a big deal such as the change to Annabeth's appearance and personality, the addition of Persephone, and the changes to the quest activities itself.

One change that I felt was perfect is an increase in the ages of the characters.  In the book, Percy is only 12 years old, and that was my main problem with the book.  I could not for one second believe that Percy and company were so young.  The film has them around 16 or so, and that felt much more appropriate to the story.

I made my mother and my husband go with me to see this on opening night.  They were condescending and reluctant to go, but - aren't I the smart one? - they loved it and so did I.

Addressing the Harry Potter Issue
1.  Riordan started the series before Rowling.
2.  Both stories share obvious similarities to other hero myths, because well, they are hero myths.
3.  The Lightning Thief film was better than the HP films in my opinion by a whole bunch.
4.  I love HP and Percy Jackson, and I don't see a problem with that.

Other Reviews of the Book
If I've missed yours, let me know!

Other Reviews of the Movie
If I've missed yours, let me know!