Book Review: The Sea of Monsters 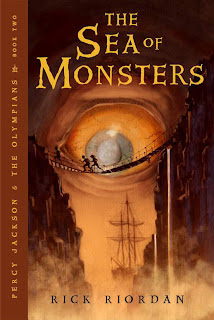 Title: The Sea of Monsters
Author: Rick Riordan
Book 2 in the Percy Jackson and the Olympians series

Plot Synopsis
(from back cover)

Percy Jackson's seventh-grade year has been surprisingly quiet.  Not a single monster has set foot on his New York prep-school campus.  But when an innocent game of dodgeball among Percy and his classmates turns into a death match against an ugly gang of cannibals, things get...well, ugly.  And the unexpected arrival of Percy's friend Annabeth brings more bad news: the magical borders that protect Camp Half-Blood have been poisoned by a mysterious enemy, and unless a cure is found, the only safe haven for demigods will be destroyed.

My Thoughts
As with The Lightning Thief, this is my second time reading The Sea of Monsters, but once again I was easily pulled into Percy's world and eager to read how he managed the new quest.  Just like the first installment, the action never stops in this story.  From battling Scylla and Charybdis to hydras to cyclops to Circe, Percy is hit with a wave of Greek troublemakers.  I really enjoy the pacing of these stories as they make for quick, entertaining reads.

While the first book had more history in it, so to speak, with the motivations and rules of the gods and the such not, this installment has more in the way of emotion.  Personally, I like the history more, but it was nice to see Percy dealing with his new and strange family issues. I can't really say more on that without giving too much away.

I think that the second book in a series has a strange place to fill.  The first book's responsibility, in my opinion, is to create the world for us, give us the exposition necessary to understand where we are.  It also, of course, has to make us relate to the characters, to care about them.  But I think it is the second book in a series that really has to pull off character development.  If the world created in the first book is interesting enough, we will read the second, but now we need to fall in love with the characters so that we care about what happens to them.  I think Riordan succeeded in those two tasks with the first two books.  At this point in the series, I am treading onto new ground as I haven't read the remaining three books yet (although I may have read the third, or at least part of it, before my cousin took the series with him back to Washington).

Memorable Scene: During a bout of chariot races, Stymphalian birds begin to attack the spectators, plucking and tearing flesh.  Annabeth remembers that Hercules used bells to create such a hideous noise the birds flew from it.  In a spark of innovation, Annabeth and Percy run off to Chiron's cabin and use his Best of Dean Martin CD to scare the birds away.  That's just funny to me.

Memorable Quote:  Annabeth, Percy, and Chiron are talking and the following happens:  Annabeth was trying hard not to cry.  Chiron brushed a tear from her cheek.  "Stay with Percy, child," he told her.  "Keep him safe. The prophecy - remember it!"

"Um..." I said.  "Would this be the super-dangerous prophecy that has me in it, but the gods have forbidden you to tell me about?"

I love the sarcasm in that 'just checking' statement.

Question:  What do you think is the most important thing for the second book in a series to do?