Book Review: A Room of One's Own 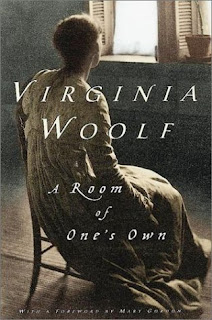 Plot Synopsis
When Woolf is asked to speak about Women and Fiction, she finds herself reflecting primarily on the necessity of having a room of one's own and a fixed income to write.  For women, these two requirements have been all but absent throughout history.  Over the next 100 pages or so, Woolf makes a controversial yet logical statement regarding the relationship between women and writing.

My Thoughts
Woolf's use of metaphor, imagery, and anecdote makes reading this short work worthwhile even for those who are not interested in the content itself.  And that is saying something for work of this kind.  I often find myself intellectually stimulated but creatively bored by treatise, focused analytical works on specific subject matters.  I enjoy reading them but primarily for the knowledge they bring.  Woolf manages to impart knowledge creatively and maintain reader interest not only through insightful commentary but also through interesting and appropriate illustrations.  For example, the hypothetical storyline referred to throughout the work is the creation of Shakespeare's sister.  Woolf examines this fictional character's life in an effort to concretely show the difficulties of female writers at the time.

Woolf's exigence in writing the work is consistently evident and useful as it gives readers who are women a direct address.  She is talking directly to us, asking us pertinent questions as she guides us through her train of thought.  One of the first instances of this direct address that really had me feeling like Virginia and I were sitting down to tea starts with a discussion of a person looking for books on women.  She writes:


One went to the counter; one took a slip of paper; one opened a volume of the catalogue, and ..... the five dots here indicate five separate minutes of stupefaction, wonder and bewilderment.  Have you any notion how many books are written about women in the course of one year?  Have you any notion how many were written by men?  Are you aware that you are, perhaps, the most discussed animal in the universe?

I can hear the astonishment in her voice as if we were chatting, and this feeling of intimacy between reader and author persists throughout.  I found myself wondering if this intimacy, this use of tangent and anecdote to reveal a truth, is part of what Woolf means when she says women need to use their own voice, own structure, own sentence, when writing.  She argues, and I agree, that too often women writers through necessity, choice, or lack of option, adopt a male voice, structure, and sentence when writing.

I could go on and on and on about the lovely way Woolf wrote, but I'll talk a bit about the subject matter itself.  Woolf's claim is much  more in-depth than a person needs a room and some money to write.  Her main points, in my opinion, are as follows:

Women have not consistently written "Great Literature" because:
For me, one portion of her argument that really stood out was that women need to stop being like men, trying to fit the mold created by a history full of male writers.  Woolf seems to think that the attempt by a woman to fit into this mold detracts from her own, uniquely female, creativity.  I admire this idea, that women are distinct from men.  Equality does not mean similarity. At least to me.

She goes on to argue that "great minds are androgynous" (a la Coleridge) in that the male portion of the brain and the female portion must be working together to create something truly original.  She argues that "it is fatal for anyone who writes to think of their sex", going so far as to argue that it is fatal for a woman to "speak consciously as a woman".  Obviously most feminists today would disagree, but I have to say I can see the logic in her argument.  She is saying that a writer needs to be focused on the story itself, on the idea of it, the writer needs a clear mind to sort of let the words flow, instead of consistently attempting to put a particular political spin on the story.

Just like with the writing itself, I feel I could discuss for ages the ideas presented in this work.  I am saddened that it took so very long for me to read this insightful and delightful work.

Relevance:  In reading other reviews (not necessarily the ones linked below), I was shocked by how often the issue of relevance came up.  It appears that many women out there have not experienced sexism/oppression, and all I can say is Good for You!  I find the world to still be riddled with ideals of and ideas about women that are but a short step away from the views of women taken 100 years ago.  Household chores, childcare, domesticity is still the realm of women no matter how many women have husbands who "help out".  Even the term "help out" suggests that the job is the woman's and she is lucky to have a partner who will take on some of her responsibilities.

Women, of course, have the choice of whether or not to marry, have kids, get a job, etc., but for the most part Expectations regarding those choices have not dramatically shifted.  I would hazard a guess that 95% of the world still EXPECTS women to marry and raise children, to keep the house in order and herself presentable, and this same society finds women who decide to take another path to be strange.  We are definitely still raised by culture and (often) parents to want to marry and bear children.  As such, Woolf's argument about having a room of one's own is still very very relevant to contemporary society in my opinion.