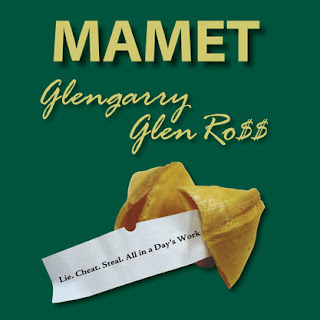 Glengarry Glen Ross is a play by David Mamet that has won accolades across the board, been featured in the National Theatre of London, been on Broadway, and made into a movie (starring Al Pacino, Alec Baldwin, Jack Lemmon, Alan Arkin, Ed Harris, Kevin Spacey - I mean holy heavens Batman that is some serious casting).

The action takes place over two days in two settings: a Chinese restaurant and a real estate office.  The characters are real estate agents from Chicago trying to sell swampland in Florida to unwilling buyers, and they will lie, cheat, bribe, and in general be insufferable to do so.  Their immorality doesn't stop with schmoozing average joes; they are also ridiculous to each other and willing to do just about anything, including steal, to make a buck.  In other words, they are terrible people.

I am entirely unsure how I feel about this play.  I picked it up from the library on a whim.  I was just walking around finding where things were (my first time in this particular library) and the title jumped out at me, being as it was familiar.  I brought it home and read it during a blackout.  I just love it when we lose electricity; that is some serious guilt free reading time in my opinion.

I think my main problem with the play was the language.  No one finished their freaking sentences.  Like ever.  I can see swindly egocentric men getting a bit phrase-ish when they get excited, but trying to read a play where every single character has difficulty forming a complete thought is taxing.  I wonder if the film version is better; there's no way they made the movie true to the play as far as dialogue and action.  Otherwise the movie would be extremely short and dull; after all, the entire play is conversations.  With that cast of actors, it shouldn't be too difficult a movie to watch.

As for what I did like about the play, first and foremost, it was interesting to watch listen to read about such horrible people.  They were such over the top stereotypes of swindlers and listening to them complain and scheme was a bit entertaining.  Overall, I can't give a solid recommendation.  I'm glad I read it, but I definitely won't be reading it again.