In light of the absolutely splendiferous Hogwarts Reading Challenge and the equally wonderful Flashback Challenge...and then there's the Young Adult Reading Challenge and the 101 Fantasy Challenge...okay, I think that may be all of them...anyway..In light of all these challenges, and just for fun, I've decided to re-read the Harry Potter series this year.  I'm going to review them particularly from the perspective of a re-read, so the reviews may not make much sense to those who haven't read the books.  I apologize for this, but I just don't think it's possible to write a regular review of a book you've read 10+ times; you have too many biases going in to the reading. 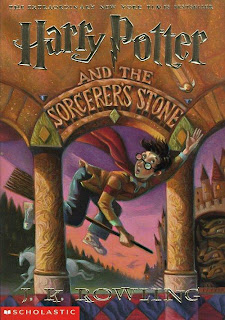 Harry Potter and the Sorcerer's Stone, followed by The Chamber of Secrets, were, of course, my introduction to the series years ago.  I think I picked up the first pure and simple to see what all the fuss was about.  At the time, I rarely read YAL.  Actually that's one thing the Harry Potter series did for me - it introduced me to an entire world of books that I adore.  I remember feeling the book was a bit immature for me when I first started reading, but then the experience took over and before I knew it I was flying through the next two books in the series.

I believe I've read these books about 12 times - an educated guess - and I have to admit that both of them lack the spark they once held for me.  While the world Rowling creates in the first two books is fascinating, her later books are so much more detailed and mature that re-reading the first in the series is a bit of a let down. Quite a bit of the plot feels contrived: Harry seems to always be in the right place at the right time; then there's that whole scene where he forgets the invisibility cloak but he and Ron still think they have it on...really?; and of course one can't forget Dumbledore's feeling he needed to be back at the castle; and in book 2 Snape sneezes at a particularly opportune moment....hmmm... My enjoyment may also be affected by the film versions of these two books which, with some bad acting and repeated phrases, I found sad and disappointing. 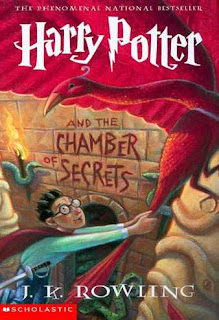 You may argue that the spark has left because I've read them so many times, but I find that is generally  not the case with me.  I enjoy re-reading books because I tend to find something new in them every time.  The Sorcerer's Stone though is a relatively simplistic tale, and my discovery of "something new" is more of an attempt to find clues and foreshadowing to events in later books.  The Chamber of Secrets is definitely a better tale, in my opinion, primarily because the story is a bit more complex.  Plus, there's Dobby, whom I adore.

I will say that these books are wonderfully quick reads, and my familiarity with the stories makes them doubly so.  I had to continually remind myself to slow down, read each word, because my brain was having a grand old time getting ahead of the plot.  Even though some of the magic is gone, I still liked reading both books - in part because I know what's coming.