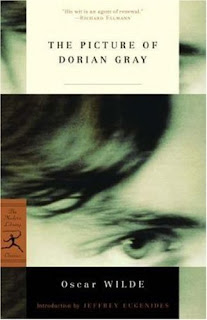 Plot Synopsis
Dorian Gray is young, innocent, and beautiful, but his friendship with two different men forever alter young Dorian.  Basil Hallward loves Dorian as his muse, beauty and inspiration.  Lord Henry Wotton sees in Dorian a chance to influence, to mold.  The feelings, the image of himself, that these two men create for Dorian cause him to spontaneously wish that he remain young forever while the painting of him created by Hallward feel the effects of aging.  His wish is granted.

My Thoughts
I can't believe I have had this book sitting on my shelf for so long, ten years or so.  Recommended to me on numerous occassions, Dorian Gray finally jumped to the head of the TBR list when I started looking for a new novel for my Intro to Lit course.  Many bloggers had reviewed and recommended it, and I thought it was time to read.  Thank the gods that be I did because I think the book will be perfect for my class.

Every single beautiful page of this fascinating story has an idea, a claim, that is discussion worthy.  The plot itself offers wonderful themes: the construction of identity, hedonism, naturalism, the art and artifice manipulation, love, the role of literature, and on and on.  Dorian's fall into self-aggrandizing and immorality, and his sporadic and half-hearted attempts to escape present readers with a warped mirror with which to judge their own beliefs.

But outside of the plot, we have the intriguing character of Lord Henry Wotton who seems disposed to wax eloquent on all manner of subjects and spouts truisms and philosophies non-stop.  To make matters even better, Wotton's philosophies defy conventions and portray a world view that is at once detestable, intellectual, and uniquely believable.  Wotton argues that "the only way to get rid of temptation is to yield to it. Resist it, and your soul grows sick with longing for the things it has forbidden to itself, with desire for what its monstrous laws have made monstrous and unlawful."

Wotton overtly and consciously manipulates Dorian, seeing in him the possibility of a life lived vicariously.  For while Wotton is a self-proclaimed hedonist and loudly defies societal conventions, his own life is rather staid.  Instead of living his ideals, he coaxes Dorian into a life lived in the pursuit of pleasure and continually validates Dorian's less than moral activities and invalidates Dorian's sporadic attempts at morality.  In the beginning of the novel, this master-puppet metaphor is born out by a quote from Wotton:


"...to influence a person is to give him one's own soul. He does not think his natural thoughts, or burn with his natural passions.  His virtues are not real to him.  His sins, if there are such things as sins, are borrowed.  He becomes an echo of someone else's music, an actor of a part that has not been written for him."

Later Wotton thinks to himself...


Talking to [Dorian] was like playing upon an exquisite violin.  He answered to every touch and thrill of the bow...There was something terribly enthralling in the exercise of influence.  No other activity was like it.  To project one's sould into some gracious form, and let it tarry there for a moment; to hear one's own intellectual views echoed back to one with all the added music of passion and youth; to convey one's termperament into another, as though it were a subtle fluid or a strange perfume: there was a real joy in that...he would try to be to Dorian Gray what, without knowing it, the lad was to the painter who had fashioned the wonderful portrait.  He would seek to dominate him - had already, indeed, half done so.  He would make that wonderful spirit his own.  There was something fascinating in this son of Love and Death."

I have spent a good deal of time wondering about the relationship between Dorian and Wotton.  How much of Dorian's sins are his own and how much are Wotton's?  Was Wotton's influence really the locus of evil or was it in Dorian's own heart?  It will require a good deal more thinking, I believe to make any sort of decision.

I suppose I should say a word about reading this outside of academic study.  Again, I heartily recommend it.  While there are a few moments in the story where I was a bit frustrated by the lack of action, for the most part, the plot maintained my interest.  It is not the most exciting of texts as far as action goes for the actual events are interspersed with a great deal of detail and abstract thought that is more like a philosophical speech than an action-adventure film.

Overall though the issues hit upon in this text are so timeless, so thought provoking, and so prominent that one could read just for the intellectual pursuit.  I can not wait to see what my students have to say about the myriad issues presented in this text.

Question:  Has anyone seen the film, and if so is it worth it?