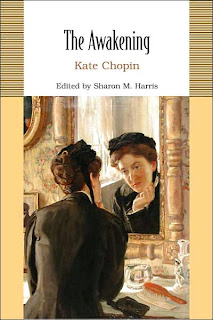 Plot Synopsis
Edna Pontellier is a wife and mother engaged in a harmless summer flirtation with Robert Lebrun, as was common among the married women who summered on Grand Isle.  But Edna's flirtation is coupled with a newfound sense of freedom, freedom that has been denied her or at least a freedom she has not taken advantage of.  And her view of the world and her place in it is about to change drastically.

My Thoughts
Much has already been said about the merits of this book, and if you are interested in a well-written and well-thought-out review of the book in its entirety, I recommend reading the links I've provided below.  I am more concerned with one thought that has settled insistently in my mind after reading - and to discuss this point requires plot spoilers.  So if you haven't yet read the book, I would skip this review.

The penultimate event of Edna's transformation is her suicide.  She has grown as a person over the course of the novel, recognizing her discontent with her marriage and her life and actively pursuing her own desires and dreams.  She stops doing what is expected of her and begins doing what she wants including further work with her painting, fostering new friendships, and moving into her own house.  She even engages in a mini-fling with Alcee as her sexuality is awakened.  At this point, I am cheering for her.  I understand the general malaise she is feeling, and I am proud of her attempts to escape into her own being.

When Robert returns from Mexico and is once again available to Edna, she does not hold back from her desires and is only thwarted in her love affair when her friend Adele goes in to labor and Edna must leave Robert.  In an action that is both frustrating and highly romantic, Robert does not wait as intended for Edna to return, but instead leaves a note saying "I love you. Goodbye because I love you."

This brings us to the last short chapter of the book where Edna returns to Grand Isle and swims far out into the water until her strength fails her.  At this point, I recognize that part of me is supposed to feel a sorrowful pride.  Edna knew she could not go on in the role cast for her, and yet her attempt to escape did not pan out.  I get that there is a fearful nobility in her suicide.  But I am struck by sadness that this woman, who has grown so much, did not fight for the new world she had created. Her options did not seem lost, her plight did not seem hopeless; it seems to me a failure on her part.  Then again, that could be my feeling at this moment time...my opinions about issues such as this are so fluid.

Memorable Quote: I would give up the unessential; I would give my money, I would give my life for my children; but I wouldn't give myself. I fully believe that the best mothers - the best parents - are those who retain their own selves while parenting.  To lose one's self in one's child is detrimental for both parties.

Memorable Quote 2:  Woman, my dear friend, is a very peculiar and delicate organism - a sensitive and highly organized woman...is especially peculiar.  It would require an inspired psychologist to deal successfully with them.  And when ordinary fellows like you and me attempt to cope with their idiosyncrasies the result is bungling.  Upon first reading, I thought 'damn that's sexist'.  I shared it with my husband and he said, "Sounds about right." :)