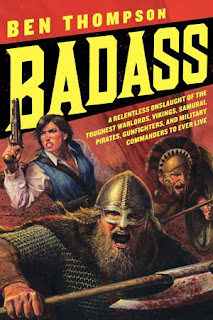 Plot Synopsis
Really I think the title says it all; this ultra-fun and oddly historically informative book features 40 of the toughest masters and mistresses of badassery to grace our past, plus bits and snippets of other badass facts.

Written in 40 chapters, Badass not only gives a brief and hilarious accounting of these tough-as-nails-in-your-eye-sockets heroes and villains, it also provides asides and side notes, meaning you get even more historical baddassery.

My Thoughts
While I generally consider myself a peace-loving person, more hippie than warmonger, I can't help but admire the bravery, strategery (not a misspelling), and insanity of these people.  They had within them a strength, a passion, that I do not.  Here are a few random badasses (links will take you to the complete article):

Anne Bonny:  a crazy mean-ass pirate bitch who sailed across the Carribean Sea fucking up anybody who looked at her funny and generally being a kickass scourge of the seas, making a name for herself by hacking the arms off of merchant sailors, stepping on their necks, and then shooting them out of a cannon face-first into a brick wall.

Julia Agrippina: "Rome's Sweetheart", kind of like Julia Roberts, only if instead of acting in charming romantic comedies she hacked Osama bin Laden's arms off with a chainsaw, nuked North Korea, and poisoned half of the House of Representatives to death with cyanide cupcakes.

Wolf the Quarrelsome: First off, his fucking name is Wolf.  You don't get a name like Wolf by being a seventy-pound nerd that gives himself a hernia trying to pick up a box of file folders (unless of course it's like an uninspired RPG handle or something, but even then you would never have the fucking balls to ask your friends to start referring to you as "Wolf" in your day-to-day life).  Wolf is a serious fucking name.

Chandragupta Maurya:  In addition to being a destroyer of armies, a ruler of men, and a conqueror of cities, Chandragupta was also awesome because he was more paranoid than a crazy pothead conspiracy theorist on a guided tour of the Pentagon.

Seriously, I would love to go on and on with this list, but I'll stop now.

Leaving the subject matter aside, let me just say that Thomspon's tone and way with words had me laughing out loud on more than one occasion. As you can see by the above quotes, Thompson uses irreverent humor and naughty words to get his point across, so if that's not for you, well Thompson says you can "go join a convent".  He's just freaking hilarious, in my opinion, and if you'd like to see what I'm talking about (or not..whatever) you should head over to Badass of the Week, Thompson's website which inspired the book.

I can not stress enough how much I enjoyed this book.  Fascinated by the history of violence and rampantly jealous of this style of writing, I will probably read this one over and over again.

Question:  Is it cooler to whack off someone's head with a sword, smash someone's face in with your own head, or eviscerate someone with a machete?