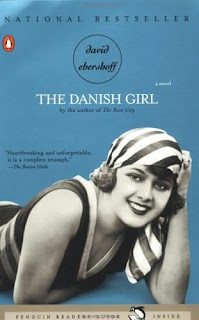 Title:  The Danish Girl
Author:  David Ebershoff
Others by Author:  The 19th Wife

Plot Synopsis
Einer and Greta's marriage changes drastically one afternoon when Greta asks Einer to put on some stockings and a dress so that she can finish a painting.  Not long after, Lili, the woman inside Einer, comes to call.  What follows is a moving journey for Einer, Greta, and Lili that will transform their lives.

Einer Wegener was the first man to undergo a sex change operation, and he did so in the early 1930s.  For years before that, however, he was Lili Elbe, still living with his wife Greta, who was supportive of his transformation into a woman.   Ebershoff's The Danish Girl is very loosely based on Einer and Greta's life and should not be taken as anything other than fiction.  I must say, however, that Ebershoff has done a wonderful job making the story sincere; it feels real, honest.

What fascinated me most was the dichotomy of Einer and Lili.  They were presented as two distinct people by Ebershoff, treated as two distinct people by Einer's wife and friends, and Einer directly addressed the distinction, saying that Lili was a separate person living inside him.  His was not a transformation; it was the death of one person so that another could live.  Lili was not Einer, not who Einer wanted to be; she was an entirely new person and for her to have her own life, Einer had to cease to exist.  Something about this way of looking at transgender feels sincere.  Not only does it validate the life of the physical gender person, it acknowledges the life of the emotional gender person. Einer was not a stand in for Lili; he was his own man with his own life.  And Lili was not Einer with a twist; she was her own person. Hmmm....I hope that made sense.

The real push of the book focused on the relationship between Greta and Einer and Greta and Lili.  How Greta handled what for many would be an impossible and devastating situation is what kept me coming back to the book.  How can a wife help her husband transform into a woman, knowing she will lose him completely in the end?  I can't imagine being that supportive, that unselfish in my love, so I must admit that I had a bit of difficulty relating to Greta. For a bit of time in the story, I wondered if Greta was in fact falling in love with Lili.  This is not supported by the book however.

Whether or not Greta was in love with Lili, she clearly did love her, as well as Einer.  Many, including Ebershoff, classify this as a love story, and I completely agree.  Love is complicated and diverse, and I felt the book portrayed the joy and pain well.  This is a delicate story, carefully delving into a transformative experience.  This delicacy can make the story feel a bit superficial, character motivations being a bit unclear at times, but I thought this worked well for the story as it created a feeling of uncertainty within the reader that mirrored the uncertainty of the characters.

In other news, The Danish Girl is being made into a film starring Nicole Kidman as Einer.  I've heard Charlize Theron, Uma Thurman, and Gwyneth Paltrow as Gerda, so who knows for that role.  Unfortunately, we will have to wait until 2012 to see the film.

Memorable Quote:   Identity - the loss and acquisition of it, the borrowing, the stealing, the rejection, the embrace; we grow up and declare ourselves yet the beautiful and awful past lingers forever.  Beneath the rubble and the char, inside the pre-fab concrete and the asbestos tiles, swirling amid the factory belch and the cough of the car, rising in the wind, in the face of a daffodil bending beneath the last snow of the year, history and memory are held aloft by imagination and the sun, as bright as a white kite above the river.  Nothing is lost, I told myself that day in Dresden.  A novel is written so nothing can be lost.

This quote actually comes from Ebershoff's introduction to the story - which thankfully comes at the end of the novel.  I thought it beautiful.