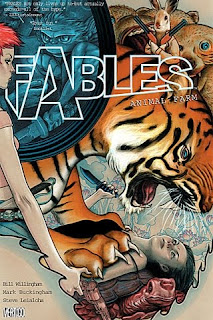 Plot Synopsis
Driven from the homelands by a powerful adversary - who is wonderfully referred to as "The Adversary" - fairy tale creatures (calling themselves Fables) of all shapes and sizes have settled in New York.  But there is a divide.  Non-human fables are hidden in a farm upstate, and their isolation and virtual imprisonment has provided fertile grounds for revolutionary ideas.  When Snow White and Rose Red stumble upon a secret meeting, the revolution begins.

My Thoughts
Golding's Lord of the Flies meets Welles' Animal Farm. Sort of.  I mean if they had fairy tale characters and serious weaponry.  Thematically and plotmatically (use this word!), Animal Farm relates well to these classic stories, but it is more than just an off-hand reference.  I was struck by the literary references within the story.  I adore allusions to other works - well, I adore them when I catch them.  When I miss them and find out about them later, I feel pangs of intellectual jealousy.  The allusions aren't mysterious in this volume.  The title itself is a dead giveaway, and then a certain event which shall not be named takes place, clearly referring to another work of literature.

Outside of allusions, this volume in the Fables series has a lot to recommend it.  The plot lines and characters are unique and surprising.  Willingham cleverly weaves his world, allowing the reader to enter into it rather than reading descriptions of it.  New characters appear as the story calls for it with no unnecessary introduction, and backstory is revealed through the present tense plot.

In my review of the first in the series, I gushed like a fangirl, and I have to say that I still am feeling that urge.  I have the next three in the series sitting on my shelves, waiting to be read.

Question:  Is it better to read a series back to back or have a bit  of time in between each installment?