Book Review: Of All the Stupid Things 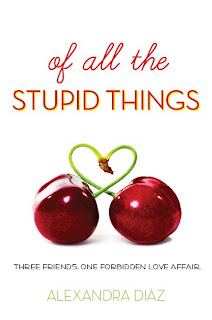 Title:  Of All the Stupid Things
Author: Alexandra Diaz

This is another simultaneous review with Amy from Amy Reads and Amanda from The Zen Leaf!

My Thoughts
While in NYC for BEA and BBC, I attended the Teen Author Carnival where Alexandra Diaz was promoting her debut book, Of All the Stupid Things.  During the panel discussion, she presented the novel as a story about three girlfriends and what happens when one of those friends falls in love with a new girl in town. Copies of the book weren't available at the time, but I later saw her at the BEA in the autographing area and was able to snag a copy.  The GLBT premise and the very awesome cover had me excited to read this.  Unfortunately, the book didn't quite cut it for me.

First off, the elevator pitch she gave and the subtitle there on the cover - Three Friends, One Forbidden Love Affair - are rather misleading.  While a lesbian relationship does exist in the book, I think it's a great stretch to say it is the focus. Actually, the story would have been much, much better had Diaz narrowed in on this idea.  As it, there is just too much going on.

Each of the three girls - Tara, Whitney, and Pinkie - have their own issues, absent father, unconcerned parents, dead mother, and yet these issues are never really explored.  They simply form a superficial backdrop for some of the mini-plots of the story.  Even character actions occur with little explanation, and I found myself questioning choices the characters were making and feelings they were having.  The novel was just too shallow, a constant skimming of the surface even as some rather serious events happen: betrayal, loss of virginity, coming out, all those parent problems...

I do think that Diaz has potential; after all, this book has a host of unique plot-lines which would make interesting stand-alone books. Hopefully on the next go round, she narrows her focus and sets her sights on truly exploring a single idea.

The Filmic Connection
At one point in the story, David asks Whitney to go to the movies. David has been obsessed with Whitney for years, but she has always kept him the role of friend, believing him to be a bit beneath her.  In honor of this often used geeky boy-hot girl relationship, the ultimate "just friends" boy...the one and only Duckie from Pretty in Pink. 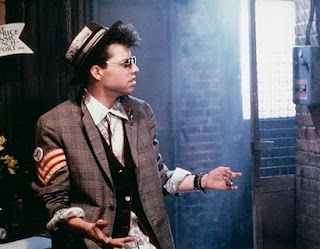 Question:  Isn't Duckie just adorable?
Posted by Trisha at 6:10 AM