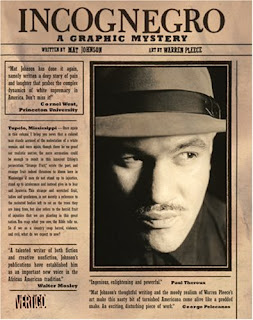 The Short and Sweet of It
Zane is a reporter in Harlem. He is black, but he can pass as a white man, and this skill allows him to infiltrate the south and reveal the horrors of lynch mobs. When an assignment goes bad, he barely escapes with his life, and he returns to Harlem determined to stop his incognegro work.  But when Zane's brother is arrested for murdering a white woman down in Mississippi, Zane has to go undercover once more.

A Bit of a Ramble
I went into this graphic novel expecting an education on race relations in the 1930s and what I got was an entertaining mystery which was also powerfully informative and moving. The author, Mat Johnson, "grew up a black boy who looked white" and dreamed of using his appearance to promote racial equality. While in college, he read about Walter White, a pale-skinned black man who went undercover to investigate lynchings in the deep south. This is the inspiration for Incognegro.

It would be very difficult to read this graphic novel and not admire and fear for the protagonist, Zane. I would hazard a guess that everyone picking it up comes in to the story with negative feelings about lynchings and a deep understanding of the hate, sorrow, despair, and fear surrounding race relations in the 1930s. For most, it requires very little prompting to call up the emotions necessary to access the book.

I do want to stress that while the book is certainly evocative, it is also entertaining. The plot is a well-crafted mystery with unique characters. My mind continually strayed from thinking about the "message" to wondering whodunit and how.

Drawn in stark black and white panels, the artwork really makes apparent the difficulty of assigning race and the fluidity of race. The characters don't have skin tones, so the distinction between the black and white characters is practically non-existent.

I found this page so thought-provoking. The text is as follows:


That's one thing that most of us know that most white folks don't. That race doesn't really exist. Culture? Ethnicity? Sure. Class too. But race is just a bunch of rules meant to keep us on the bottom.  Race is a strategy. The rest is just people acting. Playing roles. That's what white folks never get. They don't think they have accents. They don't think they eat ethnic foods. Their music is classical. They think they're just normal. That they are the universal, and that everyone else is a deviation from form. That's what makes them so easy to infiltrate.


How could you approach a person with a loaded shotgun like that? Pointed at you...!

She might be big, but she's still a woman. I knew that if I stood my ground, stared her in the eyes, she couldn't be cold enough to pull the trigger.

I takes it you ain't never been married?

The Filmic Connection
I think that the subject of lynchings will forever be linked to the film Mississippi Burning in my mind. I must have been 9 or 10 when I watched it for the first time, and its powerful portrayal of the investigation into the murders of three civil rights workers dramatically affected me. If you haven't watched this movie yet, you should.